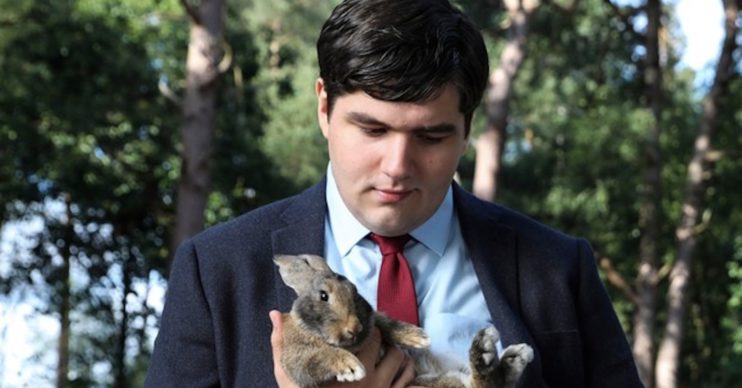 Does Travis Smith have autism in real life? Actor plays Mark Berwick in The A Word

Travis joined The A Word cast in series two

Travis Smith has reprised his role in The A Word as Mark Berwick.

He plays Sophie’s autistic teenage son who has suddenly developed a desire to join the army.

Although the talented 19-year-old actor does an incredible job of portraying Mark and his condition, does Travis Smith have autism in real life?

Does Travis Smith have autism?

Travis was diagnosed with both autism and Asperger’s syndrome while he was in year five at primary school.

“Luckily, my mum worked with autistic people and so recognised it early, when I was about three or four,” he said.

READ MORE: Does Max Vento have autism in real life? The A Word star plays Joe

“I received a formal diagnosis at nine or ten, even though we knew for years.”

During his school years, he suffered with terrible anxiety and would regularly suffer from panic attacks.

He was misunderstood by his teachers and seen as “naughty” which made his challenges even tougher.

But Travis always had a passion for acting and attending youth theatre groups.

How did Travis Smith get his part in The A Word?

Travis’ mum came across an advert for the part of Mark while reading a newspaper by chance.

It said the BBC were looking for autistic actors to come for auditions.

Although he loved acting, Travis didn’t jump at the idea because of his anxiety.

However, after some gentle encouragement from his mum, he decided to give it a go.

“[My mum] is part of lots of parent groups,” Travis explained.

“I didn’t think I would have a chance. I applied online and they called me to London for an audition.”

The rising star then drove down to the Big Smoke where he auditioned for Susan Tully, who directs The A Word, the show’s casting director Andy Prior and producer Jenny Frayn.

“I was shortlisted a while after and got a call on a Saturday morning – I didn’t believe my mum at first,” he added.

Fast forward a few weeks and Travis found himself on set with Lee Ingleby and Morven Christie in the Lake District playing Mark in series two of The A Word.

What has Travis Smith said about The A Word?

Travis has been full of praise for the portrayal of autism in The A Word.

During an interview with the BBC, he explained that the condition is often misunderstood.

He said: “The first thing that normally comes to mind when media, TV and film represent autism is Rain Man. There’s always been this stereotyping and lack of understanding.

“Autism is everywhere and it’s important for a television show to show the public we’re not all just Rain Man. I’m terrible with maths! Acting is my thing.”

While filming the second series of The A Word, Travis played on his own past experiences when acting out Mark’s meltdown.

A meltdown can be triggered by anxiety or over-stimulation in people with autism.

Behaviours can include crying, shouting and even self-harm.

“I cried in my hotel room after and not just because I whacked my knuckles but because it was such a crazy thing to act out what I used to be like,” Travis added.

“But I have to praise The A Word because they weren’t afraid to show how effective meltdowns can be.”

Although Travis plays Mark in the show, he has admitted that he realties more to the character Joe.

“Despite Mark being what I was like a few years ago, Joe resonates most,” he explained.

“Listening to music, needing a schedule. And Max, who plays Joe is exceptional.”

What happens in The A Word series 3 finale?

The A Word series 3 will come to an end tonight (June 9).

In the finale episode, Rebecca (Molly Wright) visits Joe (Max Vento) at his school in Manchester.

Up until now, she had been struggling with anxieties that her unborn child could have autism like Joe.

But after spending time with her little brother and his classmates, she feels better.

But drama strikes when Rebecca and Joe drive home to the Lakes.

While driving down a remote country lane, Rebecca unexpectedly goes into early labour.

Making matters even worse, her phone battery is dead.

Due to his autism, Joe becomes frightened when Rebecca starts screaming in pain.

Meanwhile, Ben (David Gyasi) asks Alison (Morven Christie) to join him for lunch to talk about their relationship.

Have you been watching The A Word? Leave us a comment on our Facebook page @EntertainmentDailyFix and let us know what you think of the new series.