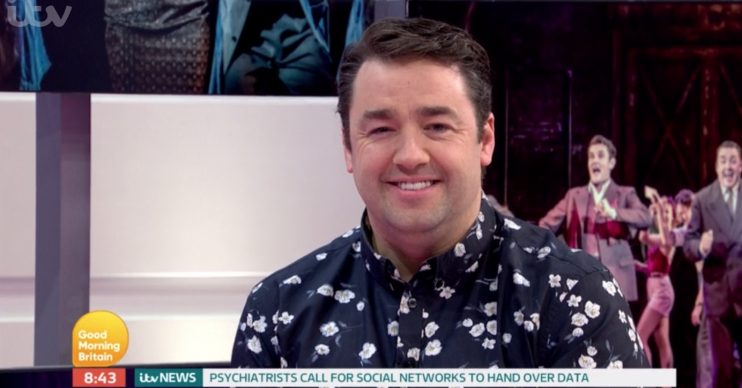 He's denied it's him, though!

Comedian Jason Manford addressed speculation that he is Hedgehog on The Masked Singer this morning (17.1.20).

Jason, 38, appeared on Good Morning Britain to talk about his theatre show Curtains and and addressed rumours that he could be one of the people under a mask.

He also admitted that his own kids think that he is the spiky character.

Jason revealed to hosts Ben Shephard and Kate Garraway that his own BBC One gameshow, First & Last, had been moved in order not to clash with the ITV smash hit.

Making reference to the rumours that Jason is Hedgehog, Ben asked: “Have you moved the time because you don’t want to defeat yourself?”

Chuckling, Jason replied: “I don’t want to spoil the show by saying no but – no.”

“I watched it for the first time last week with my kids, and they asked me as well!”

He went on to say he thinks Hedgehog is either Alexander Armstrong or Michael Ball.

So far in the series, ex-EastEnders actress Patsy Palmer was unveiled as Butterfly, MP Alan Johnson popped up as Pharoah and Darkness singer Justin Hawkins was revealed to be Chameleon.

And viewers are convinced that Girls Aloud Nicola Roberts is Queen Bee.

Other fan theories include Chase star Jenny Ryan as Duck, and current Dancing On Ice judge John Barrowman as Unicorn.

The hedgehog is definitely Jason Manford. He was in Sweeney Todd as Pirelli, and died every night killed by the titular character. He also did a show where he learnt to sing opera and in a more classical style #MaskedSinger #TheMaskedSingeruk pic.twitter.com/TfQHlczKvz

One viewer said: “Google him singing and it sounds exactly the same.”

Another fan of the show who’s convinced Jason is under the mask tweeted him directly and said: “I think you’re trying to put on a posh accent on #TheMaskedSingerUK but you said the word “last” and you couldn’t hide your Manc accent.”

The Masked Singer continues on Saturday January 18 at 7pm on ITV.