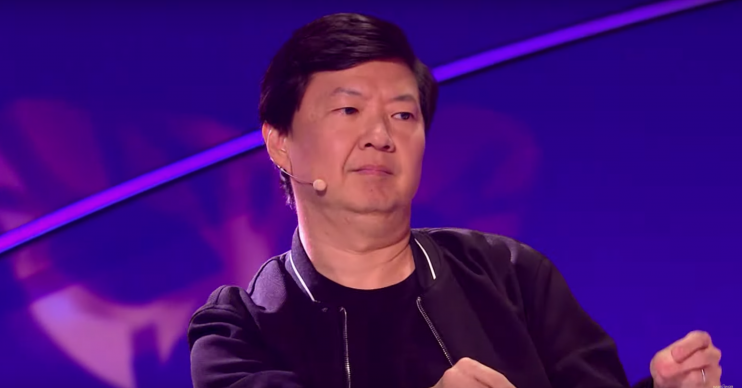 Among the surprises in store from the international telly hit was an appearance from former EastEnders star Patsy Palmer, who became the first ridiculously costumed celeb to be voted off.

But while the silliness seemed to get a big thumbs up from those watching at home, not every aspect of the show was an immediate hit.

The line up of judges trying to guess who’s warbling under a mask includes Jonathan Ross, Davina McCall, Rita Ora and Ken Jeong.

But US comedian Ken – star of The Hangover – did not prove a popular choice with everyone.

Some critics on social media claimed he was “unfunny” and “annoying” – and there were even some suggestions the show would be better without him on it.

“Ken Jeong is so annoying,” tweeted one person.

“If they do a second series, I hope they get rid of him #TheMaskedSingerUK.”

Ken Jeong: 'I know exactly who this is…' #MaskedSinger Also Ken:

Another social media user moaned about Ken’s patter: “Have to say, Ken Jeong and his ‘I know who it is’ line again and again is getting annoying. #MaskedSinger.”

“Ken Jeong is just annoying and he won’t have a clue who most of these Brits are. Might have worked on the US show (never saw it, avoided it) but one-trick pony on ours. #MaskedSinger,” claimed one person.

While somebody else reckoned: “So ITV have somehow made The Masked Singer about the singing – when it should be about the mystery, they’ve made it too long, they’ve used trippy and frankly bad imagery and they’ve got the famously unfunny Ken Jeong using highly American comedy that doesn’t work at all.”

And yet another unconvinced viewer concluded: “Okay, so first episode of #MaskedSinger down. It’s okay for what it is, but it’s not as entertaining as I thought it might be. I’ll carry on watching though to see if it improves. Oh, and Ken Jeong is annoying af.”

Some loved him though, with one writing, “Ken Jeong makes this show” and another tweeting, “[Ken], you [were] so funny on #TheMaskedSinger, had me in hysterics! Really enjoyed the show”.