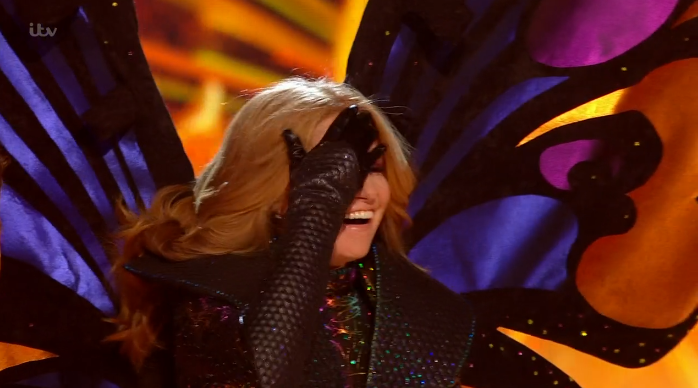 The Masked Singer: Patsy Palmer is revealed as the first celebrity is voted off

Viewers think they have worked out Queen Bee...

The Masked Singer burst onto ITV screens in an explosion of colour and craziness last night, with six singing celebrities hidden behind outrageous costumes.

As the first artist took to the stage, dressed as Queen Bee, viewers were feverishly trying to guess her true identity – with Charlotte Church and former Girls Aloud singer Nicola Roberts popular choices.

Queen Bee is Nicola Roberts for sure! #themaskedsinger #TheMaskedSingerUK

Other performers in the first episode of the series, hosted by Joel Dommett, were Duck, Unicorn, Hedgehog, Chameleon and Butterfly.

The panel of celebrity guessers – Davina McCall, Rita Ora, Jonathan Ross and Ken Jeong – struggled to figure out which famous faces were hidden behind the elaborate costume.

At the end of the episode, Patsy Palmer was the first celebrity to be unmasked, as Butterfly.

The former EastEnders actress failed to impress the studio audience with her performance of  You’ve Got The Love.

Patsy admitted she had been “really nervous” about taking part in the show but it was still a dream come true to appear.

Explaining why she’s taken part, she said: I love singing in general – not that I’m any good – but it’s an extremely uplifting thing to do.

She said: “I have no idea who anyone else is in this show, it’s been the craziest experience. It could be anyone.”

“I see butterflies everywhere, I just love them.

“They’re so beautiful and delicate – and not me.”

The actress has mixed feelings about her departure from the show.

She said: “I’m a little bit sad I was out first but somebody’s got to go, I’d a few other songs I’d been practicing but I guess I’m relieved now because it’s so nerve-wracking…

Who do you think is behind the other masks? Leave us a comment on our Facebook page @EntertainmentDailyFix and let us know!