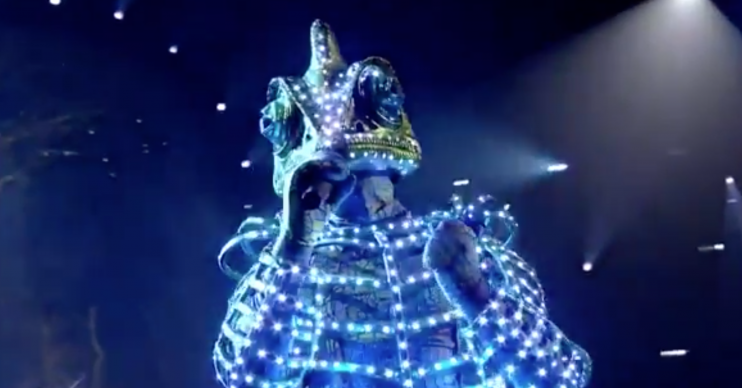 Justin Hawkins from The Darkness unveiled as Chameleonon The Masked Singer

So not Antony Joshua, Rita Ora!

Justin Hawkins is the latest celebrity to be unveiled on The Masked Singer tonight (11.01.20).

The Darkness frontman – who was dressed as Chameleon – was forced to reveal who he was after being booted out of the ITV competition on Saturday night.

Asked by host Joel Dommett why he wanted to do the competition, he said: “I did it because I wanted to show you guys I’m still alive.”

With the celebrity panel of Jonathan Ross, Davina McCall, Rita Ora and Ken Jeong guessing it could be boxer Anthony Joshua, swimmer Tom Daley or dancer Curtis Pritchard, Justin admitted: “I was really flattered by the athlete guesses.”

Before Justin was unmasked, Rita admitted she had a bit of a crush on Chameleon.

The Let You Love Me singer gushed: “You are one of the best performers. You literally go upside down on your head. Handstands, you’re so energetic.

“No wonder you have that presence and I knew it and I felt it through your mask. I think you’re just amazing, I really do.

“I’ve absolutely gone red, I can’t do this anymore. This has blown me away, it shows me I have no idea what is even happening.”

However, viewers think Rita was gutted to discover who the man behind the mask was, dropping the rose he’d given her immediately the mask came off.

Rita Ora when she saw it was Justin #themaskedsinger pic.twitter.com/uWhDpxFrPP

Meanwhile, Davina added: “It made sense with the spending loads of money and going absolutely mad as well because you were a legendary party man and you came back.”

Joel told The Darkness frontman: “You’re so wonderful to watch. Such physicality and you just brought so much to this incredible character.”

Justin was unmasked as Chameleon after facing Duck in the face off. Unicorn, Queen Bee and Hedgehog were voted in by the audience and will be safe to sing again.