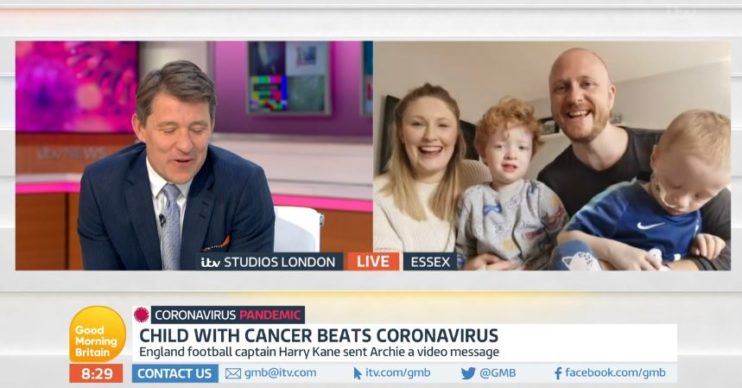 Little Archie was full of beans, to viewers' delight

As part of a moving interview, Ranvir Singh and Ben Shephard discussed this difficult time with Archie Wilks’ family.

The inspirational four year old battled COVID-19 while receiving treatment for a rare form of cancer.

GMB rewarded the brave boy with a message from his favourite footballer Harry Kane, live on the show.

While undergoing treatment for the cancer neuroblastoma, Archie began to develop a fever.

This was later revealed to be the deadly coronavius.

After spending six days in hospital with his father, the four-year-old boy could be discharged.

Ben Shephard was delighted to reveal Archie had “beaten the virus” as he welcomed the family on the show to discuss their ordeal.

Archie, whose journey is documented on Instagram, appeared on the show with his parents and twin brother Henry.

Archie’s mum revealed that they had been self-isolating at home a week before the UK lockdown was announced, apart from “unavoidable” hospital appointments.

She described finding out her son had COVID-19 as a “shock”.

Archie brushed up on his footie today. After not being able to walk due to the cancer in his legs a year ago, he’s really built up a lot of strength. He’s still a bit wobbly but loves to kick the ball about and put it through Dads legs 🙄 We’ll be on Good Morning Britain on Thursday via Skype (we’ll be given a time tomorrow) and potentially BBC news after that, sharing Archie’s story of his cancer journey and recent COVID experience. So proud of our little Hero 🦸🏼‍♂️

His dad expanded on this: “We didn’t expect it. We were in hospital when his temperature spiked. We were transferred straight to the coronavirus ward. It was really worrying.”

Ranvir was curious about how being in the vulnerable category affected Archie’s response to the virus.

The GMB’s guests father explained that his immune system was compromised due to the chemotherapy treatment. The four year old had also experienced lung problems in the past.

“He did need oxygen on the first night and his condition did deteriorate on the second night,  but the nurses and doctors did get on top of it.”

Good Morning Britain presenter Ben Shephard pointed out that Archie had recovered well as he looked “full of energy”.

Speaking about being separated from her son, his mum said: “It was really difficult to not be there and make sure he’s okay.”

Ranvir asked the family how they kept positive while their child was ill, as “some families will be suffering this type of trauma for the first time” – during the pandemic.

His mum agreed: “It is a lot harder in the self-isolating situation. In the previous year we would do a lot of days out to distract ourselves.”

His dad shared: “You have to just try to tune in and treasure each moment.

“You have your ups and downs but you just power through.”

Ben Shephard pointed out that the brave little boy was wearing a Spurs shirt, during the chat.

After Ben asked who his favourite footballer is, the boy screamed: “Harry Kane.”

The football star then appeared on the screen with a special message for Archie.

Harry Kane ‘s message said: “Hi Archie, glad to hear you’re on the mend. Keep listening to the doctors and nurses. I hear you and your twin brother Henry love to play football, so play in the garden and stay at home. I wish you all the best.”

The family ended the segment by thanking the NHS.

Incredible how strong Archie has been. Hope him and his brother Henry enjoy scoring loads more goals in the garden! 👏👏👏 pic.twitter.com/mhineHDTs0

One said: “Oh my goodness, what a story from little Archie and then @HKane I’m crying #GMB”

Another shared: “Bless him. So pleased he is a little fighter xx”