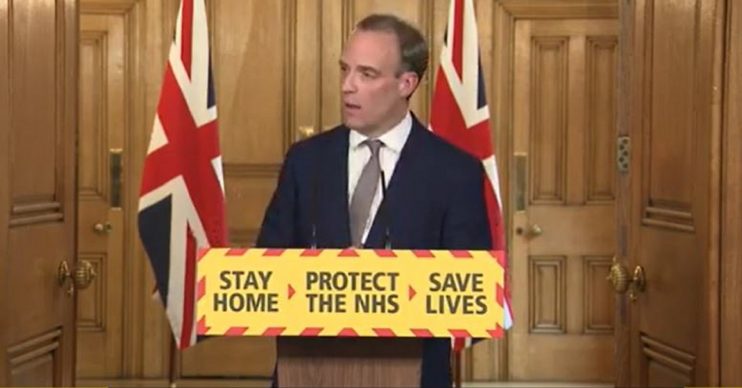 It will be reviewed in May

The coronavirus lockdown will continue in the UK for at least another three weeks, the government has confirmed.

The government will review the restrictions in May.

He told reporters at the No.10 press conference: “The government has decided the current measures must remain in place for at least the next three weeks.”

It effectively means that the measures in place to halt the spread of the deadly coronavirus, which Prime Minister Boris Johnson announced on March 23, would continue.

Ministers will look at the measures again in May, to decide whether or not to lift any.

Current measures must remain in place.

Pressed to reveal whether Brits should expect the lockdown to continue for three weeks or three months, the Foreign Secretary said: “The Prime Minister said at the outset that it would take three months to come through the peak and I think and I think that is still broadly the outline.

“We can’t give a definitive time frame. That would be to pre-judge the evidence and that would be an irresponsible thing to do. But our message to the British public is; there is light at the end of the tunnel.

“We are making progress, but at the same time we must keep up the social distancing measures.”

Hope from the data

Elsewhere in the conference, Mr Raab said there is hope from data showing that the number of infections is no longer increasing in the community.

But there is less certainty when it comes to hospitals and care homes.

Brits, he said, will have to continue following Government advice until scientists and medical professionals are certain the outbreak is under control.

Mr Raab, who is currently deputising for Prime Minister Boris Johnson: “The worst thing we could do is ease up too soon. It would be the worst outcome not just for public health but the economy and the country as a whole.”