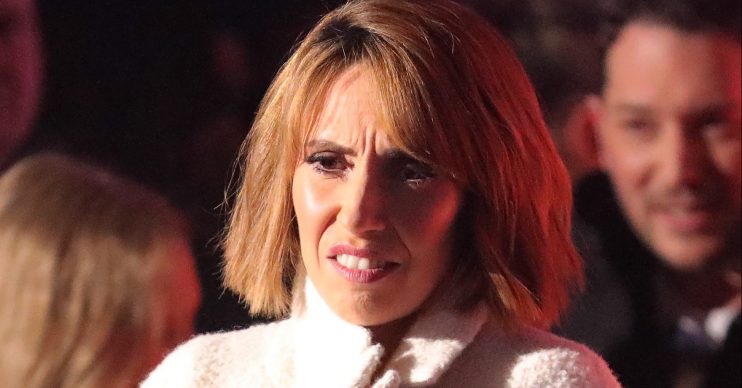 No time for anaesthetic!

The One Show‘s Alex Jones had revealed the shocking moment an accident on the set of the Great British Bake Off left her with a “massive” piece of glass in her hand.

The presenter, 42, was filming The Great Celebrity Bake Off for Stand Up To Cancer when she suffered an injury and needed stitches.

In a chat with the Metro, she explained: “They had these fancy electric mixers, where you attach the glass bowl, put the whisk in and press go. It turns out my bowl wasn’t attached and the moment the blade hit it, the bowl shattered into 1,000 pieces.”

Speaking further, the mum-of-two recalled: “I’m saying, ‘I’m absolutely fine’ before realising there’s a massive shard of glass sticking out of my hand. I had to go straight off to the paramedic for stitches.

“He said, ‘I’m just going to put in the anaesthetic’ and I was like, ‘No, there’s no time for that, I have a showstopper to make, just do it!'”

Alex took time off The One Show last year when she and her husband, Charlie Thomson, welcomed their second child, named Kit.

She returned from maternity leave at the beginning of 2020, debuting a new shorter hair style as she returned to present along stand-in co-host Patrick Kielty, who was covering for outbound presenter Matt Baker.

There’s a massive shard of glass sticking out of my hand.

Last month, Alex revealed she won’t be having any more children and said the decision was for environmental reasons.

Alex and Charlie, who also have a three-year-old son called Teddy, have decided they do not want to expand their brood any further “for the sake of the planet”.

Back to work today. So many different feelings. Anxious about leaving the boys, excited to be back on the show. As soon as I put lipstick on this morning, little Ted looked at me with his huge brown eyes and asked “where are you going mummy?” It nearly killed me, but it’s time to go back and I’m looking forward to going back to a job I love, but my goodness, I’ll miss these two. So here we go…the juggle begins.

The Welsh star, who also said she feels “too old” for more kids, said in an interview for the April issue of Good Housekeeping magazine: “Charlie is adamant that for the sake of the planet, two children is enough.

“And I think I’m too old to have another child now, anyway.”

Speaking further, Alex said: “It happens for a lot of people and good for them, but we’re just glad we have two healthy children.”