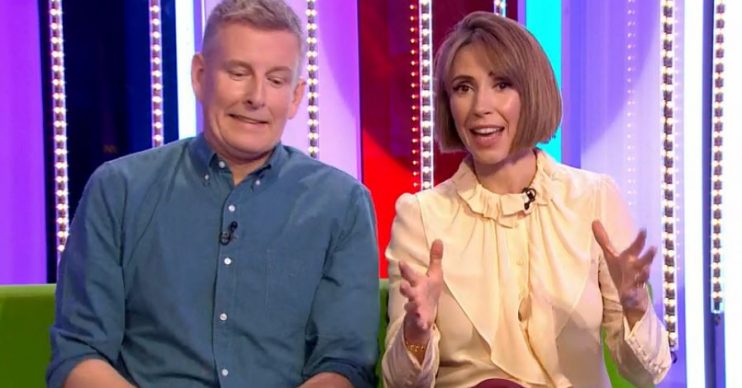 Presenter Alex Jones was discussing the Duke and Duchess of Sussex on The One Show when she made a big blunder live on air.

The Welsh favourite, 42, was talking about Prince Harry and Meghan Markle‘s controversial decision to step down as ‘senior’ members of the Royal Family when she had to interrupt proceedings and admit to losing her notes.

At the end of a segment that saw Alex take to the streets to hear from members of the public about the Sussexes, she said back in the studio: “Well, public opinion, as we saw there, is quite divided and we’ve had loads of comments from you at home, which we’re going to try and get to, but later…

“I’m looking for them, I don’t know where they’ve gone, they were here a minute ago and they’ve disappeared, just like that.”

Patrick then said: “Erm… we are going to be reading those out [later].”

The programme had BBC royal correspondent Jonny Dymond on to offer an update for viewers on Harry and Meghan choosing to go financially independent.

He said: “What we’ve got from the Palace is talk about trying to make the plans of Harry and Meghan work, and about how they can put this aspiration into practice.

“I’ve just spoken to someone at the Palace who said they are working to get these proposals worked out in days, not weeks, so they really are pushing forward if they can.”

Speaking further, he revealed the “hurt” the sudden decision caused among other royals, who had no idea what was coming.

Jonny continued: “There’s quite a lot of hurt, actually, at the Palace because they say they did not know anything about this coming.

“Discussions were at an early stage about the future, but the idea that this was fully formed in the heads of Harry and Meghan did not occur to them.”

The Sussexes announced their shock decision on Instagram on Wednesday (08.01.20) evening, telling followers it had been made “after many months of reflection and internal discussions”.

A spokeswoman for the couple confirmed that the Duchess, 38, had returned to Canada to be with their eight-month-old son, who is said to have stayed there with a nanny.