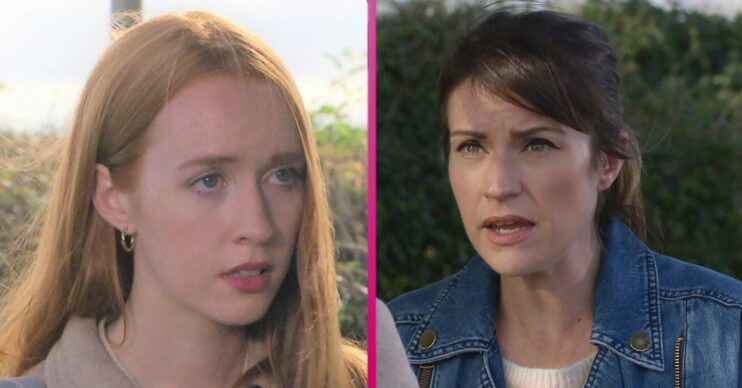 What is Chloe’s dad called in Emmerdale? Soap finally reveals his name

So now we know his name, does that rule out any of our guesses?

Emmerdale has teased more details about Chloe’s dad as the soap has finally revealed his name.

But as it doesn’t fit with any of the theories fans have come up with so far, does that mean we’ve been wrong all this time about who Chloe really is?

Read more: Emmerdale fans choose Meena’s next victim as they beg her to kill again

What is Chloe’s dad called in Emmerdale?

It was revealed that Chloe’s dad is called Damon during a conversation between Kerry Wyatt and Damon’s thugs.

They had followed Kerry after Chloe and Noah ran away together. Lynden, the chief henchmen, sarcastically told Kerry that “Damon was going to be chuffed to hear about this”.

Kerry urged Lynden not to tell him and eventually bought herself 48 hours to find Chloe. He told Kez if she didn’t find the girl, he’d ask Damon how to deal with her, warning: “You do not want that to happen.”

So who is Chloe’s dad?

We know Chloe’s father is dangerous and not someone to be messed with. He’s in prison, but is still managing to keep Chloe in relative captivity.

Her mum is dead – though we don’t know how or why – and even Charity Dingle seems scared of this guy.

There have been multiple theories over the identity of Chloe’s dad in Emmerdale.

Fans are convinced Rhona’s rapist and murderer ex-husband Pierce Harris, who is currently in prison, is Chloe’s father because the two share a surname.

He is currently in prison for the murder of Graham Foster as well as the kidnap of Rhona’s best friend Vanessa Woodfield.

However, now we know the guy’s name is Damon, does that rule out both Pierce and Declan? It’s feasible they could have changed their names.

Or are they just connected somehow to Chloe’s dad? Does Pierce have a brother called Damon, perhaps?

Some viewers think she is actually Zoe Tate’s daughter, Jean.

Jean was the product of a one-night stand between Zoe and Scott Windsor. She would be 18 years old now and left the village in 2005.

What happens next for Chloe?

After Chloe’s failed attempt to run away with boyfriend Noah, Kerry has promised to come up with a plan to help free the teen.

Tonight (Friday, November 19) all will be revealed, but will their plot work?

However, can Chloe ever really be free of her father’s clutches? Or is she destined to remain his prisoner forever?

Who do you think Chloe is? Leave us a comment on our Facebook page @EntertainmentDailyFix and let us know what you think of this story.