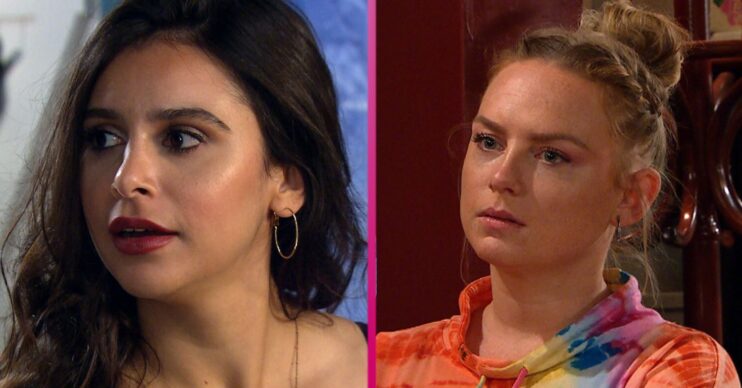 They sided with murderer Meena on this one!

Murderous Meena Jutla squared up against Amy Wyatt in last night’s Emmerdale and it looks like she could have a new victim in her sights.

Amy has been very vocal in her defence of Victoria Sugden getting together with David Metcalfe, even though David was in a relationship with Meena at the time.

On Thursday (November 19) Meena was determined to win David back, but was furious when she discovered he and Vic had fled to Portugal.

What happened between Amy and Meena?

After Meena’s discovery, she decided to take revenge by breaking into Victoria and Amy’s house and smashing the place up.

Amy came home during her tantrum and almost caught her red-handed. But Meena managed to escape.

When Amy told PC Swirling who she suspected was responsible for the vandalism, he questioned Meena. However, wily Meena managed to talk her way out of it.

She then stormed over to Amy’s and the pair had it out in the street. Although Amy went back inside, Meena screamed at the door, which was witnessed by Billy, who broke things up.

Why do Emmerdale fans want Meena to kill Amy?

Many viewers think Amy needs to pay for her own killer past.

They have suggested Meena could be the one to do it and they wouldn’t mind if she did!

Just couldn’t stand that nasty murdering bitch having a go at her in the street then! But enough about Amy, Meena was in the wrong too…☹️ #Emmerdale pic.twitter.com/mh44VrtDEk

Not overly concerned if Meena kills Amy since she basically killed Frank and I’m still not over that. #Emmerdale

Not me hoping Meena kills Amy I can’t stand her character, she is so self righteous for someone who committed manslaughter #Emmerdale

Meena I wouldn’t mind if you threw Amy off a bridge. #emmerdale

Change of plan, Meena. Kill Amy instead. Do us all a favour. #Emmerdale

Amy and Meena have both got away with killing someone #Emmerdale pic.twitter.com/97LUx1sxud

Who did Amy kill in Emmerdale?

Amy and her mum Kerry were responsible for the death of Tracy and Vanessa’s dad, Frank Clayton.

When Karen, an old mate of Amy’s, showed up in the village demanding money, Amy was shocked.

Amy had stolen thousands of pounds from Karen and she wanted it back.

Desperate for the cash, Kerry and Amy pilfered a charity collection from the sweet factory.

But when they destroyed the CCTV to stop it showing their theft, they started a fire that ending up killing Frank.

Tracy discovered the truth about how her dad died and shoved Kerry who suffered a head injury. Worried she’d get the blame for hurting Kerry, Tracy decided to keep quiet about what really caused her dad’s death.

Read more: Emmerdale explains David and Victoria’s absence, but when will they be back?

Does Meena kill Amy in Emmerdale?

By next week Meena seems to have forgotten all about her hatred of Amy and moved on to seducing Billy!

She’s set him in her sights when she uttered “wow” after he came to her defence during the row with Ms Wyatt. Next week they embark on their first date.

Although Meena has a fab time, things take a turn when Dawn arrives and it’s clear Billy is distracted by his ex.

We all know what Meena does when someone threatens to take ‘her man’ – is Dawn the next on Meena’s hit list? Or is Billy in danger if he rejects her?