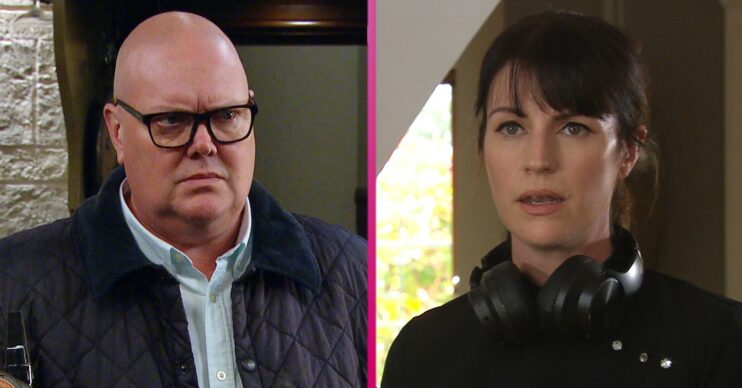 Emmerdale: Paddy to cheat with Kerry as Chas strays with Al?

Paddy is married to Chas

Emmerdale star Laura Norton has revealed she would like her character Kerry Wyatt to have a romance with Paddy Dingle.

However Laura has revealed she would like to see a romance between Kerry and Chas Dingle’s husband, Paddy, played by Dominic Brunt.

During an interview with OK! Laura was asked if Kerry could have a romance with anyone in Emmerdale, who would it be.

This is random, but Paddy Kirk.

The actress responded: “This is random, but Paddy Kirk. Me and Dominic Brunt have had a few scenes with each other and I think the characters would be so funny together.”

Paddy and Chas have been through a lot during their relationship.

Last year, Chas found herself getting closer to Al Chapman, who unbeknownst to her was cheating on his fiancée Priya Sharma with her niece Debbie Dingle.

Paddy and Chas managed to put their issues behind them and got married, but will Chas stray with Al?

In this week’s scenes, Al unveils the new Woolpack staff uniform and makes a flirtatious comment to Chas.

Later Chas tells Al that her overstepped the line with his flirty comment and he is seemingly apologetic.

But when he learns Paddy is away on a course, he invites Chas to a business dinner where he heaps more compliments on her… but will his approach work on Chas?

In next week’s scenes Al approaches Chas and seductively tells her how much he wants her.

It looks like they’re about to kiss but Marlon walks in before anything happens. He’s aware he’s just walked in on a passionate moment and demands answers, but Chas is adamant nothing is going on.

However Marlon knows what Al is like and threatens him, should he ever come between his cousin Chas and his best friend Paddy.

Cain’s brother Chas sees the altercation and Marlon fills him in on what happened.

Cain is vengeful and determined to stop Al from getting any further with Chas.