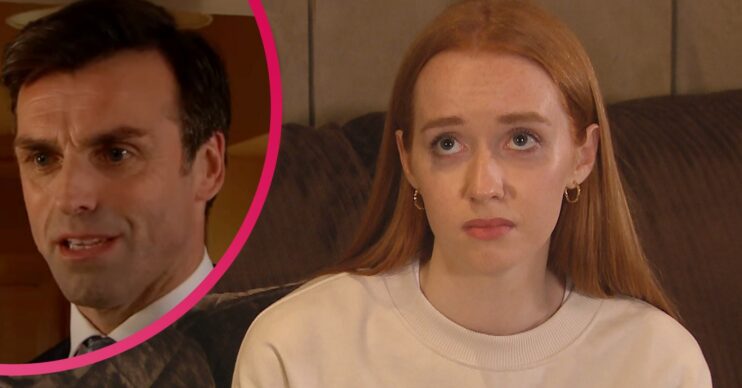 Pierce was one married to Rhona

A few months ago, Sarah Sugden decided to track down the family of her heart donor after finding out they wanted no contact with her.

Her uncle Noah managed to find Chloe, the sister of Sarah’s heart donor.

Sarah and Noah built up a friendship with Chloe, however they kept their meetings secret from their families.

When Charity found out about Chloe, Chloe cut off contact with Sarah, leaving her confused.

In Monday’s episode (November 1) Charity and Mack broke into Chloe’s house to steal some expensive items, however Charity was stunned to run into Kerry Wyatt.

Kerry covered for Charity and Mack when Chloe came home.

Read more: Emmerdale: 5 theories about who is hiding in the bushes from Will Taylor to Joe Tate

Later, when Chloe and Kerry were alone it was revealed that Chloe’s mum had died and her father was in prison.

Now fans are convinced Rhona’s rapist and murderer ex-husband Pierce Harris, who is currently in prison, is Chloe’s father.

They also pointed out the two characters share the same surname.

Emmerdale: Who is Pierce Harris?

Pierce was married to his first wife Tess Harris, who died in 2016 after being run over by Kirin Kotecha.

He went on to marry Rhona Goskirk but raped her on their wedding day.

Pierce took Rhona’s best friend Vanessa hostage but she was eventually found and saved and Pierce was sent back to prison.

Other theories about Chloe

Another is that she is really Jean Tate, daughter of Zoe Tate.

So what do you think? Leave us a comment on our Facebook page @EntertainmentDailyFix and let us know what you think!