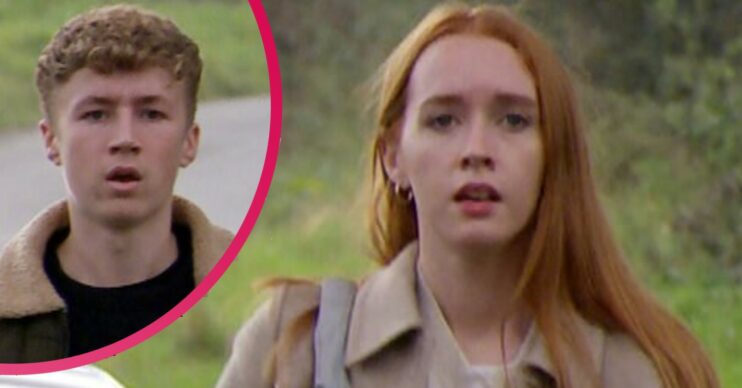 Emmerdale: Who is Chloe Harris? Is her dad Pierce Harris?

Chloe has been spending time with Sarah Sugden

Who is Chloe Harris in Emmerdale? We know a few things about the mystery newcomer, but the questions just keep coming.

Noah’s mum, Charity, doesn’t want her son anywhere near Chloe as her dad is dangerous.

Charity doesn’t know much else, but here’s what we know so far.

Who is Chloe Harris in Emmerdale?

Chloe is the sister of Sarah Sugden’s heart donor. Sarah received a new heart after hers failed three years ago. The organ she had transplanted belonged to a girl called Gemma, who had died in a car accident.

Wanting to know more about the person whose heart she now had, Sarah did some research and found Chloe, who claims to be Gemma’s sister.

Fans weren’t necessarily convinced Chloe was actually Gemma’s sister because she was acting so strangely. However, we now know her odd behaviour is down to the fact she has a very, very bad dad.

Who is Chloe’s dad in Emmerdale?

There have been multiple theories over the identity of Chloe’s dad in Emmerdale.

Kerry Wyatt works for the family and she has revealed that Chloe’s mum has died and her father is in prison.

Fans are convinced Rhona’s rapist and murderer ex-husband Pierce Harris, who is currently in prison, is Chloe’s father.

They also pointed out the two characters share the same surname.

Kerry needs to tell Charity who Chloe's dad is 😬😬. It's either Declan or Pierce Rhona's ex #Emmerdale

He is currently in prison for the murder of Graham Foster as well as the kidnap of Rhona’s best friend Vanessa Woodfield.

Some viewers think she is actually Zoe Tate’s daughter, Jean.

Jean was the product of a one-night stand between Zoe and Scott Windsor. She would be 18 years old now and left the village in 2005.

Is Chloe really into Noah Dingle?

When Chloe first came on the scene Noah was immediately smitten with her. It didn’t seem like she was into him at the beginning, and his behaviour was verging on creepy.

However, something changed and the pair are suddenly together. Although they are conducting things in secret because Charity has warned Noah to stay well away from Chloe and her scary dad.

Chloe and Noah didn’t sleep together in the end after things went a little bit wrong for him in that area.

What is this Chloe up to? Is she genuinely into Noah or what? ‍♀️ #Emmerdale

I wander if Chloe’s Dad is the reason why Chloe is getting too close to Noah? I mean why is she even staying with him he’s cringe . #Emmerdale

What happens next for Chloe and Noah?

After they met in the barn, Kerry collected Chloe and gave her a lecture on keeping away from Noah because if her dad found out he’d “rip that boy to shreds”.

Kerry and Chloe were then followed by a mystery driver.

Tonight (Wednesday November 17) Chloe and Noah will decide to run away together. But how far will they get?

Just who is Chloe Harris in Emmerdale? All will surely be revealed very soon…

Who do you think Chloe is? Leave us a comment on our Facebook page @EntertainmentDailyFix and let us know what you think of this story.