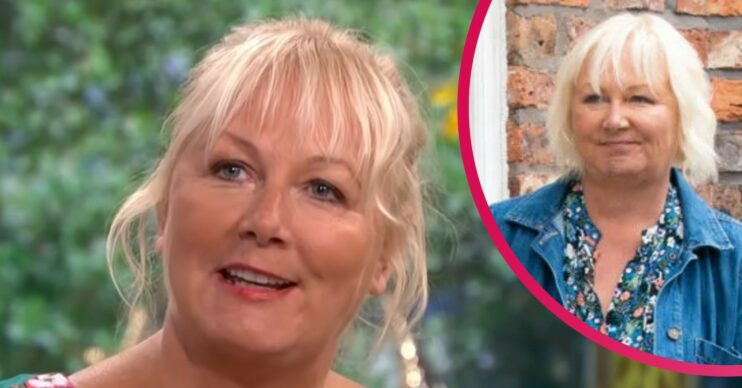 Sue Cleaver in Coronation Street: Who is she married to? And when did she face a deadly health battle?

The Eileen Grimshaw actress faced a deadly health battle in 2019

Sue Cleaver is the much-loved Coronation Street star who has been on the cobbles for over 20 years.

But her life off-screen has sometimes been just as dramatic.

With a marriage split and a life-threatening battle with sepsis, Sue’s not had always it easy.

However, she’s come through smiling!

Who does Sue Cleaver play in Coronation Street?

Sue plays unlucky Eileen Grimshaw who first appeared on screen on May 3 2000. She will celebrate 22 years on the soap next month.

Mum to sons Jason and Todd, Eileen works in StreetCars on the radio.

She has had a string of disastrous relationships during her time on the cobbles.

From Dennis Stringer to Michael Rodwell – played by Les Dennis – her worst choice ever was surely Pat Phelan.

The builder-turned-serial-killer had Eileen fooled before she realised what he was really capable of.

However, it didn’t swear her off men for good and she has recently found happiness with undertaken George Shuttleworth.

But it’s very clear he’s hiding something and as she struggles to find out what, is this another unhappy ending for Eileen?

As well as her disastrous love life, Eileen is known for her ongoing feud with Gail Rodwell.

The women have had many a catfight spill out onto the cobbles over the years!

How old is Sue Cleaver?

Sue was 37 when she joined Corrie.

Who is Sue married to in real life?

Sue was married to fellow actor James Quinn, who is a familiar face on British TV screens having starred in many shows including both Corrie and Emmerdale.

Sue met electrician Brian Owen when he was working as a lighting technician on the set of Corrie.

They both left their marriages to be together with Sue releasing a statement at the time saying: “This has been a difficult time for everybody, but Brian and I are committed to a future together.”

Sue and Brian remain together.

Before she joined Corrie as Eileen, Sue played another character, a nurse when Daniel Osbourne was born.

She also appeared  in Kay Mellor’s Band of Gold.

In 2015, she started training to be a psychotherapist

She told Soaplife magazine during her training: “I am qualified to take clients and have another 18 months to go before I can finish my four-year course in Analysis Psychotherapy at the Manchester Institute for Psychotherapy.

“It’s hard work fitting it in with Corrie, but I love it.”

She appeared on This Morning in 2016 to give advice to viewers who were struggling with violent children.

In 2019, Sue appeared on This Morning with Eamonn Holmes and Ruth Langsford and told how she’d been left fighting for life when she contracted sepsis.

She explained to the hosts she’d been taken ill on the Corrie set and her husband had saved the day.

“My husband, who also works on Corrie, he said: ‘Something’s not right’, but I said: ‘It’s all right it’s the flu, I’m taking ibuprofen, I just want to sleep’.

“He rang our daughter-in-law who’s a paramedic and she said: ‘Get her to hospital’.”

Sue went on to reveal there is an hour window in which treatment has the most chance of working and thanks to her husband and daughter-in-law, the doctors were able to save her life.

The star revealed she had contracted the killer disease from a very severe kidney infection.

“The biggest lesson for me was we stride on through life,” she added. “We’ve got commitments we put up and get on with things. Big mistake.

“We make excuses because we’re so aware of upsetting filming for everyone.”

Sue admitted she had had a tough road to recovery and it had affected her memory.

“I had to go back to Corrie to film a few scenes and it took me so long to learn the lines, so it’s taken a little while for everything to get back to normal.

“It’s taken me a long time to get better.

“I’ve had horrific nightmares, really strange nightmares, and also I don’t have a sweet tooth at all and that’s all I wanted for about three weeks, craving cakes, pastries, and custard.”

How did Sue Cleaver lose weight?

In early 2019 Sue revealed she had lost an impressive three stone.

Escaping the craziness. Thanks to my family for holding fort. Cheers pic.twitter.com/ybHlFvuNyE

The Coronation Street actress lost the weight gradually after deciding to become a healthier person for her husband and her son.

She also suffers from Type 2 Diabetes, which is often linked to being overweight or inactive.

Woman magazine reported at the time that the soap actress underwent a complete overhaul of her diet and adopted a new health and fitness regime.

A source told the publication: “Sue was always a self-confessed foodie, who admitted that over-indulgence was her Achilles Heel. Now everything’s changed.”

They continued: “Sue’s in her mid-fifties, so it was a no-brainer that cutting down on certain things was what she had to do.

“She’s in this for the long game and wants to live a long, happy and healthy life.”

Sue has previously spoken out about suffering from Type 2 Diabetes and is a supporter of the charity Diabetes UK.

Speaking while supporting Diabetes Week in 2018, Sue told Diabetes Advice: “Having good control of diabetes is really important – after all, people with the condition live with it every day, taking care of their diet and physical activity levels.”