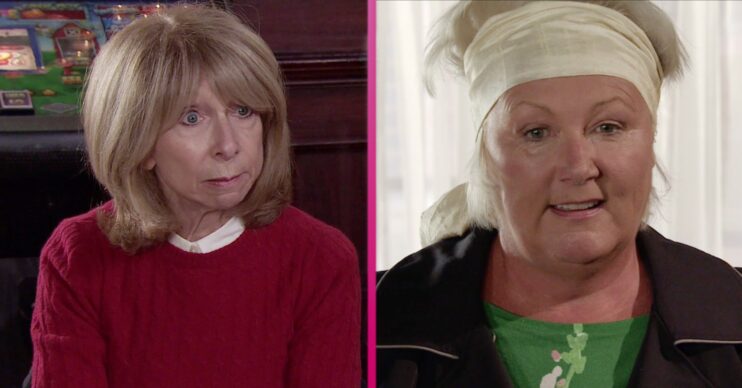 Gail and Eileen have had quite a few fights before

In upcoming scenes George asks Gail for help with a Christmas present idea for Eileen.

Later George and Todd lead a blindfolded Eileen to the undertakers where George reveals his surprise gift. What could it be?

Whatever it is, doesn’t seem to go down well with Eileen and when she finds out Gail put George up to the Christmas present idea, she tells her she’s deranged.

Gail is genuinely puzzled by her ingratitude. Could this lead to another fight?

Later Todd begs Eileen to give George another chance. When George presents her with a new winter coat and reveals he’s booked a table at the Bistro, will he be forgiven?

Gail’s feud with Eileen isn’t the only one happening in the Platt family over Christmas.

Last week, school teacher Daniel was horrified when David’s son Max accused the teacher of grooming and sleeping with his student, Summer.

So when David’s sister, Sarah, reveals her plans for a joint Christmas with the Barlow family, David is appalled.

Later Sarah rounds up the Platts and Barlows and suggests they sort out their differences as she wants a joint family Christmas.

However as the two families trade insults, Sarah wonders what she’s letting herself in for.

On Christmas Day Audrey cracks open the wine for breakfast and Gail declares she isn’t lifting a finger.

Meanwhile David slams round in a grump and Peter and Carla do a runner and Sarah despairs over their ungrateful families.

With everyone gone, Adam takes her into his arms, suggesting their real Christmas starts now.

What do you think of these upcoming spoilers? Leave us a comment on our Facebook page @EntertainmentDailyFix and let us know what you think.