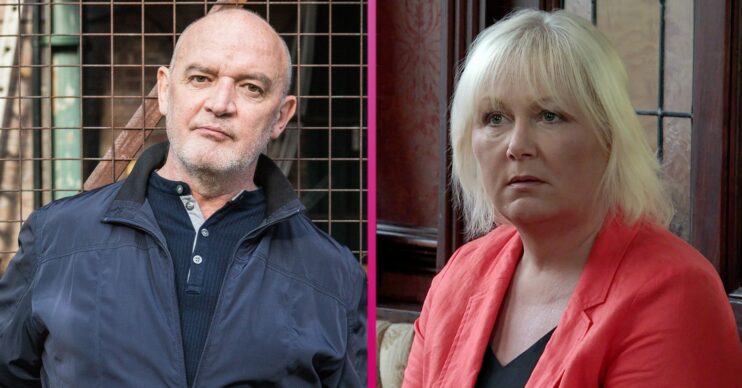 What happened to Pat Phelan in Coronation Street? Was he married to Eileen?

Phelan was one of the cobbles biggest villains

In tonight’s Coronation Street (Friday, August 27) Todd Grimshaw was shocked to find the ashes of Pat Phelan in the cupboard of the undertaker’s.

George explained he never found the right time to tell Eileen he had them, but who is Pat Phelan and what happened to him?

Who is Pat Phelan in Coronation Street?

His first wife was Valerie Phelan, but he went on to marry Eileen Grimshaw in 2017.

He is also the biological father of Nicola Rubenstein.

The crimes of Pat Phelan

In 2013, Pat went into business with Owen Armstrong, however he later fleeced Owen out of his share.

He soon blackmailed Owen’s partner Anna into sleeping with him in order to protect her son Gary, who had assaulted Phelan, from going to prison.

He returned to the cobbles in 2016 and began to terrorise Anna Windass once again.

Phelan later convinced Jason Grimshaw to invest his father’s money into property development project, unaware Phelan and his mate Vinny Ashford were using the flats as a front and they weren’t being built.

As well as scams, Pat also killed Vinny Ashford as payback after he ran off with the money they made from the scam.

Phelan watched Eileen’s ex-boyfriend Michael Rodwell suffer from a heart attack and didn’t call for help, leading to his death.

He also murdered Andy Carver and Luke Britton and framed Anna Windass after he pushed Seb Franklin off a ladder.

While away with Eileen, she began to grow increasingly suspicious of her new husband.

He eventually confessed his crimes to her and ended up falling into the sea, leading Eileen to believe he was dead.

However he survived his fall and made it to a B&B and eventually returned to the cobbles.

He went back to Eileen’s and held his daughter Nicola, who just gave birth to her son Zack, at gunpoint.

As Seb tried to attack Phelan, he ended up shooting Nicola, but she survived.

He later went over to the Bistro, where Robert Preston and Michelle Connor’s wedding reception was taking place.

Phelan took Michelle hostage and ended up shooting her, but she also survived.

However he was soon killed by Anna Windass who stabbed him. His body was then taken away.

But his ashes appear to have made their way back to the cobbles.