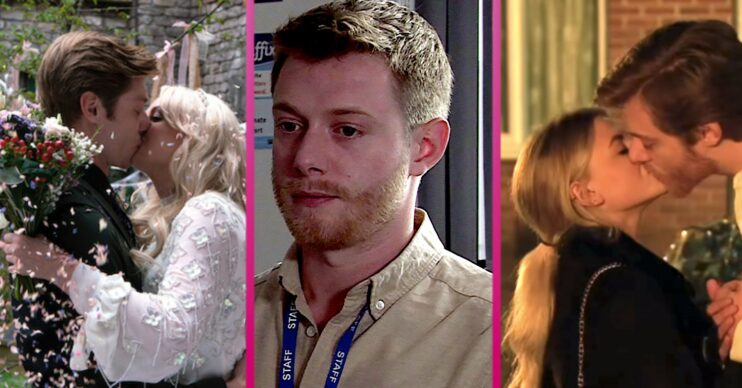 He's getting over the death of wife Sinead, but is Daisy really the right woman for him?

Daniel is definitely a chip off the Barlow block when it comes to his womanising ways – though he’s not always as successful in the love-life stakes as Peter or Adam!

With student Summer having developed a whacking huge crush on Daniel, could he be tempted by the sweet-natured teen? Or is he fully focused on new love interest Daisy?

When Daniel first arrived in Coronation Street, he fell for ditzy, funny Sinead Tinker. Only trouble was, Sinead was in a relationship with Chesney Brown.

The pair fought their feelings for a while but eventually they couldn’t resist.

Sinead and Ches split, and she and Daniel got together.

But when Sinead got pregnant, Daniel’s dad Ken was convinced having a baby would hold his son back. So he persuaded Sinead to have an abortion.

Daniel found out and pushed his dad down the stairs. When Sinead realised he was responsible for the attack on Ken, she dumped him and went back to Ches.

When he was apart from Sinead, Daniel made a few bad choices in the romance department.

He had a brief liaison with a journalist called Cindy Watson, who was helping him expose Pat Phelan’s wrongdoings. But that ended when Phelan discovered them in the act!

And Daniel’s worst choice was hooking up with brother Peter’s then ex Carla Connor.

He and Carla had a steamy secret affair – much to Peter’s disgust. Though Daniel conveniently forgot about their romance when he was busy telling Adam off for sleeping with Carla, too!

Daniel and Sinead eventually reunited and the pair were delighted when she found out she was expecting. But in a tragic twist, Sinead was diagnosed with cervical cancer while she was pregnant. She got the bad news on the day she and Daniel tied the knot in a sweet – unofficial – ceremony in the Street.

Sinead wouldn’t start her treatment until baby Bertie was born but at first, things went well. However she and Daniel were heartbroken when her cancer returned – and this time it was terminal.

Sinead passed away in Daniel’s arms and the sad dad struggled to cope without her.

Getting together with Bethany

When Sinead was ill, Daniel befriended Bethany Platt. The much younger woman was smitten with Mr Osbourne, and almost as soon as Sinead died, the pair began a romance.

But though Bethany was besotted with Daniel, it was obvious to everyone that he was simply throwing himself into their romance in an attempt to get over his grief. The pair eventually split.

After Bethany moved to London, Daniel had a brief fling with sex worker Nicky. He tried to help her pay off her debts by borrowing cash from Geoff Metcalfe. And he paid her to wear Sinead’s cardigan and cuddle him. It would be creepy if it wasn’t so sad!

Moving on with Daisy

Now Daniel’s caught the eye of Daisy Midgeley. She’s pursued him ever since she found out his mum had given him a house. Gold-digger? Daisy? Seems like it!

Despite being warned off by concerned nephew Adam, Daniel’s flattered by Daisy’s attentions and after a few false starts, they have finally arranged a date.

But will Daniel regret this latest romance?

While Daniel’s putting all his eggs in Daisy’s basket, he seems completely oblivious to the fact pupil Summer Spellman has a crush on him.

He thinks he’s just helping a kindred spirit with her studies, but she is infatuated.

Is it set to end in tears when he realises? Or does he secretly feel the same? It wouldn’t be the first inappropriate romance he’s had…