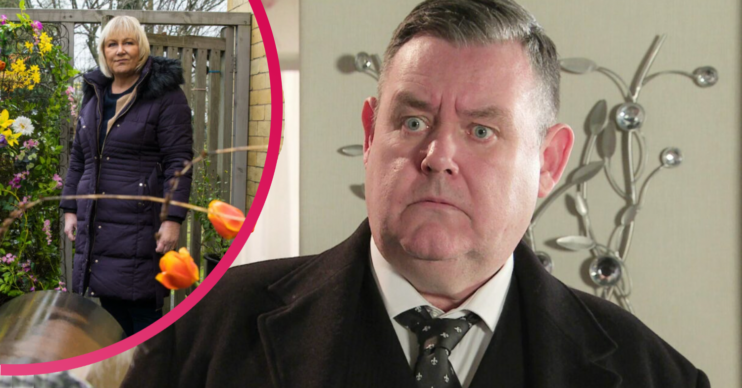 What is it this time?

Confused after love interest George Shuttleworth refuses to let her stay over at his house, Eileen is determined to get to the truth.

George tries to fob her off with a, frankly, unbelievable story about his overprotective cat, Ridley.

What is George’s secret in Coronation Street spoilers?

But Eileen isn’t fooled by his cover story and ropes in Sean Tully to help her investigate.

George is stunned when he arrives home and finds Sean and Eileen staking out his garden.

Eileen tries to explain that they were checking out his cat story, but George is furious.

He then decides he’ll get to the bottom of it himself. Will George come clean?

When Eileen tells George not to be ridiculous and stay the night, George clearly looks worried.

What is the undertaker hiding from her?

Hopefully it’s not as big as the secret he kept from her last year – that her serial killing husband, Pat Phelan, had returned from the dead.

He hadn’t really, of course, just his ashes but George and Todd didn’t want Eileen to know.

Todd had lied and told her the ashes belonged to an old lady who had no one to bury her.

Eileen then decided to give the old lady, Patsy Freeman, a proper send off.

But as she delivered a moving eulogy, George realised he couldn’t keep lying to her.

Will Eileen ever be lucky in love?

Eileen was shocked to discover the ashes were actually Pat’s and fled in terror.

George later arrived at Eileen’s pleading for her forgiveness.

He explained that he was trying to save her feelings, but had got it really wrong.

Eileen forgave him and they gave their blossoming romance another try.

So whatever George is hiding this time, it can’t be as bad as that.

Corrie fans will be hoping for a happy ending for the couple who have done nothing but fall out with each other since his arrival.

Viewers even took to Twitter back in August to say they’d lost interest in George and Eileen’s storyline.

“Oh, enough with the Eileen and George will they won’t they, the nation has lost interest!” tweeted one annoyed fan.

Will unlucky-in-love Eileen ever meet her Prince Charming?