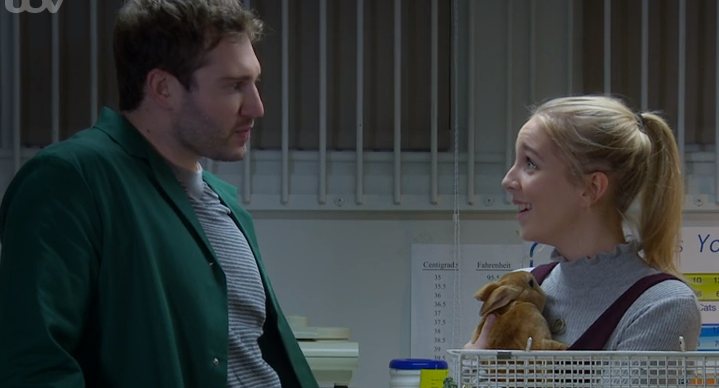 Over the last couple of weeks, viewers have picked up on chemistry between the vet and veterinary receptionist.

At Christmas they went out in Hotten together after their work meal, but viewers didn’t see what happened on their night out.

Recently Jamie has split from wife Andrea and whilst Belle is still with boyfriend Ellis, viewers want Jamie and Belle to get together.

This week, Belle grew annoyed with Jamie when he gave Ellis the advice to adopt a rabbit that she desperately wanted.

Confused, viewers thought they had missed a scene between the pair and in last night’s episode (January 15 2020), Belle’s jealousy was obvious as Jamie spoke to Andrea in the cafe.

Fans are now convinced that Jamie and Belle have secretly slept together off screen.

Have Jamie and Belle already done something… naughty… when they went out after their Christmas do and we just don’t know about it yet?
(Saw this speculated on twitter and it isn’t a ridiculous theory) #Emmerdale

Jamie split with Andrea on Christmas Day after learning she once had a one-night stand with Graham Foster.

Have Jamie and Belle done something… naughty?

The two slept together nine months before the birth of Andrea and Jamie’s daughter, Millie, leading Graham to believe he could be her father.

Although a DNA test proved Millie is Jamie’s child, he was furious that she kept such a big thing from him for years.

After they split, Belle comforted Jamie, but did anything happen between them?

Do you think something has already happened between Jamie and Belle? Leave us a comment on our Facebook page @EntertainmentDailyFix and let us know what you think!