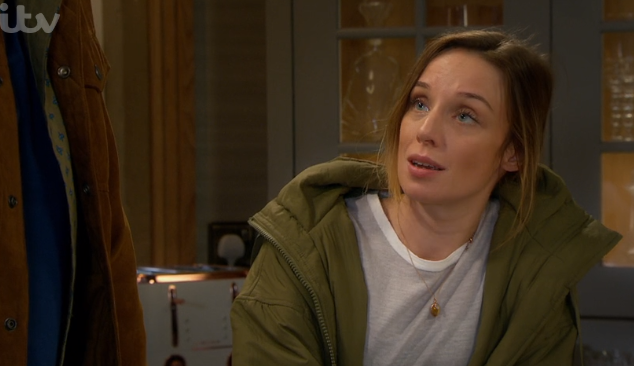 Could she be lying to Jamie?

Fans of Emmerdale have been left confused as Andrea Tate told her husband Jamie that she and Graham Foster slept together on Valentine’s Day.

Earlier this year, it was revealed that years back, Jamie’s wife Andrea had been paid by Graham to keep an eye on Jamie while his mum Kim was in prison.

While Graham was shocked to see Andrea and Jamie went on to get married, he was even more stunned to learn Jamie and Andrea’s daughter Millie may be his.

A couple of months ago, Millie ended up in hospital after an accident and Graham overheard Andrea tell the nurse Millie’s date of birth which was September 30, 2014.

Shocked by the date, Graham confronted Andrea as they had slept together nine months before Millie’s birth.

As Andrea insisted Millie isn’t Graham’s daughter, he responded: “New Year’s Day 2014, you’d been working, I’d been propping up the bar all night. They turfed us out.

“You invited us back to your place and we ended up having sex. Unprotected as I recall.”

Graham said it was New Year’s and both had been drinking.

Upset, Jamie decided to spend the night away from his family, but he eventually returned to hear the story from Andrea.

She told Jamie she and Graham had only slept together once but when he didn’t believe her she said: “It’s the truth. It was Valentine’s Day and we were both off our heads.”

Viewers were left confused as she and Graham and previously said they slept together New Year’s Day 2014.

New Year would be 9 months. Valentine's Day would be 7 months – both possible. Can't believe they've made a mistake like that.

I said it he same thing when Andrea told Jamie it was Valentine’s Day, I’m sure Graham said it was New Year’s Day the dates would workout better anyway 🤷🏼‍♀️.

Although viewers were quick to point out this could be an error, it is also possible that Andrea lied to Jamie about the date.

With Jamie now aware of Graham and Andrea’s one-night-stand, will he ever be able to forgive his wife?