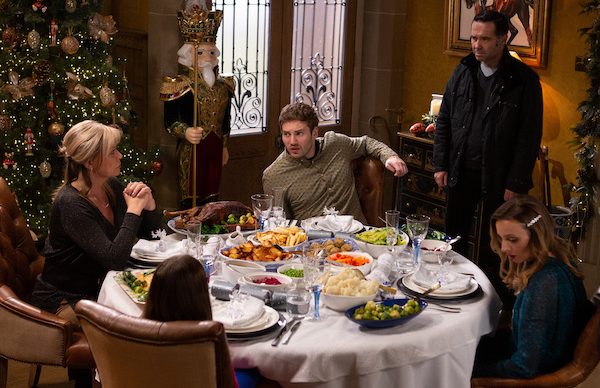 Who is Millie's dad?

The Tate family in Emmerdale are about to find their Christmas dinner comes served with revelations and mud-slinging this festive season as Graham Foster finally reveals the truth about who is Millie’s father.

But just how will Kim Tate react to Graham tearing her family apart?

Emmerdale fans have spent months waiting for the moment Graham reveals the truth to Jamie Tate about his night of passion with Andrea Tate… and as Graham gets his own DNA test done before Christmas, the truth is about to be revealed in all its glory.

Village vet Rhona Goskirk is excited about leaving the village and starting a new life with Graham and her son, Leo.

However, she can’t shake the feeling of guilt as she puts her plans to leave into place, knowing that her departure with Leo is going to break Marlon’s heart.

But while Rhona is worrying, Graham is pleased when he gets the DNA test results showing who is Millie’s biological father, and he is quick to open the envelope and read them.

But are his suspicions that he’s her dad about to be confirmed?

Kim is fuming when she finds out that Rhona and Graham have done their own DNA test despite her going to great lengths to stop them, and she knows that now the truth has been revealed it is only a matter of time before a bombshell is dropped.

And Kim doesn’t have to wait long, because as Christmas Day arrives she discovers Graham has bought Millie a present and marches over to see him to return it.

Kim reveals to Graham that she knows he has done his own DNA tests and threatens him once again, causing him to see red and come up with his own masterful plan for revenge.

Later Graham walks down the road, grim with intent, arriving at Home Farm just as Christmas Dinner is about to be served, and it soon dawns on everyone that Graham isn’t there for his turkey dinner.

As a brooding Graham starts to speak, Andrea and Kim are left terrified over what he is about to reveal… but who is Millie’s father? And what will Jamie make go the news Millie might not not be his daughter?

As secrets are revealed and mud slinging starts, things soon reach beaver pitch and life for the Tastes will never be the same again. But just how far will Kim go to keep her family intact?

It’s no secret Graham is set to be brutally murdered… could this be the moment of his demise?

Who do you think is Millie’s father? Leave us a comment on our Facebook page @EntertainmentDailyFix and let us know what you think!