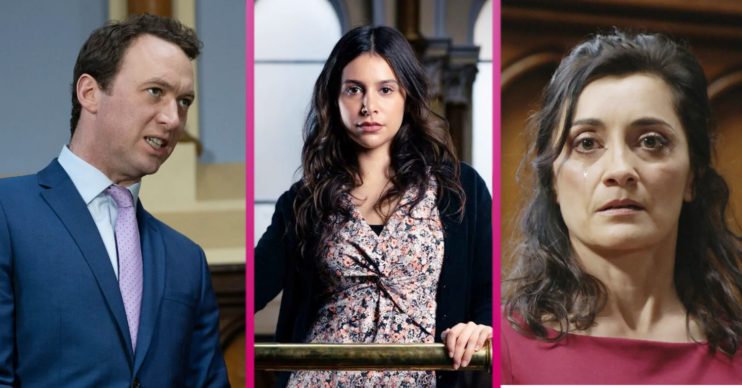 Meena is going to love the limelight

Spoilers for next week’s Emmerdale reveal Meena Jutla‘s trial begins next week and it’s set to be as crazy as she is!

The action will unfold on screen across the week with Meena’s end coming at last.

But what happens during the trial?

Is Meena in Emmerdale going to get away with murder?

Here are all the highlights of her big week.

1. Meena enters the courtroom in Emmerdale

The very moment she walks into the court for her trial to begin is already one of the best.

The village are on tenterhooks as the trial gets underway.

The tension is palpable as Meena enters.

It’s clear she’s loving the spotlight, but will things go her way?

2. Liam takes to the stand

An emotional Liam knows he has to testify to get justice for his daughter, but it’s a big ask.

Meena is playing the meek, innocent victim and it throws Liam.

He manages to gain sympathy from the jury as he fights back tears. But he’s not prepared for the onslaught of the defence.

As Liam is accused of having an affair with Meena, he loses his temper.

But has his outburst cost him the jury’s support?

Manpreet is next up as she is determined to bring her sister down.

But the defence tears her apart.

They delve into her past and paint her out as a liar only out for herself.

Has Manpreet given Meena her freedom?

Meena is advised not to give evidence.

Of course, this doesn’t sit well with her ego, and she overrules her barrister. Meena insists she will speak out and spends the night rehearsing her lines in her cell.

As Meena takes the stand she is completely convincing.

The jury are enthralled, the gallery are sickened, but has her performance won her her freedom?

Prison Officer Ian Beeker has been taken in by Meena.

He’s already been seen flirting with her, passing her a chocolate bar and smuggling in a newspaper, but how much further is he prepared to go?

As Ian becomes conflicted between his feelings and knowing what’s right and wrong, it doesn’t stop him flirting with Meena.

What is her plan for the unsuspecting prison guard?

Read more: The full cast of Emmerdale for 2022 – meet them all here!

At last the verdict is in.

Will Meena pay for all of her crimes?

Could she walk free?

What does the future hold for Meena?

And will it really be as easy as sending her to jail? Or could she have something else up her sleeve before the week is out?