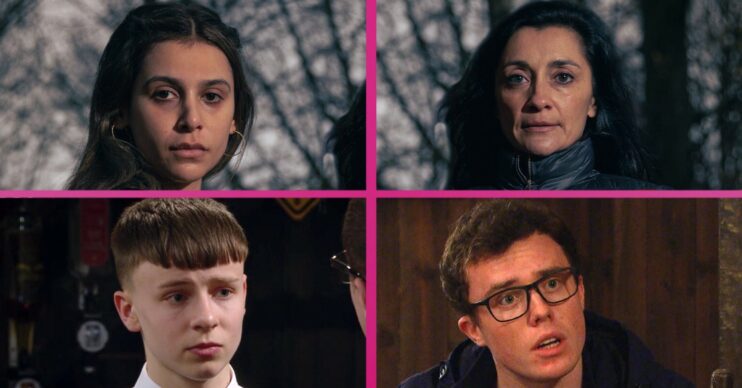 She has murder very definitely in mind

Emmerdale spoilers for this week reveal Meena Jutla is lining up three victims as she prepares to kill again.

She has her sister Manpreet Sharma, held captive and is plotting to kill her.

But Meena is also eyeing up Samson Dingle and Vinny Dingle.

It looks like there could be a bloodbath ahead in Emmerdale…

On Monday (January 3) Meena will give her sister seven days to live as a terrified Manpreet lies helpless on the bed.

Continually drugging Manpreet to keep her subdued, Meena convinces Liam to give her a prescription for sleeping pills to help her with the ‘loss of her baby’.

She then orders her sister to write a suicide note, however she’s left worried when Manpreet’s daughter Aiesha calls.

It turns out both Aiesha and Rishi are concerned for Manpreet, and Rishi has even called the police. Super-cop Harriet is on the case – so how long before Meena is caught?

Knowing she needs to act fast, Meena changes her plan and is seen dragging a body-shaped bag to her car. Has she killed Manpreet?

Meena finally realises Leanna’s ring is missing from her box of trophies. She immediately homes in on Noah Dingle as her prime suspect and begins stalking him.

But Noah knows Meena’s on to him and comes up with a plan of his own: dump the ring on unsuspecting Samson.

Noah has no idea, of course, that Meena is a killer and the significance of the ring, so he doesn’t know Samson is in danger.

But Meena is waiting for Samson on the stairs, clutching a screwdriver tightly in her hand.

She gets the ring back, but has she murdered a child in the process? She’ll stop at nothing…

Read more: The big Emmerdale quiz – are you enough of a mega-fan to smash it?

Vinny Dingle is next in her sights when Meena uncovers his murder board.

Determined to free Liv Flaherty Vinny has been working round the clock to unmask the real killer of Ben Tucker.

However, while he wants to speak to Meena in relation to it, he hasn’t registered she’s the murderer.

Meena’s uneasy when she sees her name on his board and despite Vinny screwing it up, believing he’s on the wrong track, Meena decides she has to act.

She lures him into a trap by getting him to follow her down a narrow country lane.

He’s soon trapped in her lair – has she claimed another victim or will Vinny realise and escape in time?