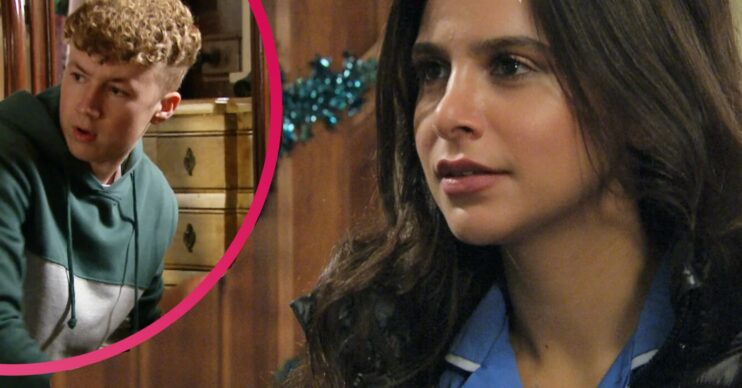 Emmerdale spoilers: Is Noah Dingle the next victim for Meena Jutla?

Spoilers reveal that Noah Dingle is set to make a shocking discovery in Emmerdale this Christmas.

But could it cost him his life?

An oblivious Noah disrupts Meena while she’s doing some festive meddling, and he’s surprised when he finds dead Leanna’s ring on the floor.

Not realising what he’s stumbled across, Noah pockets the trinket, with no idea who it really belongs to.

Fans of the ITV soap know that Meena swiped Leanna’s ring after murdering her earlier this year.

The ring was a present from Jacob Gallagher. He originally proposed to Leanna with it, but after she rejected him he gave it to her as an 18th birthday present.

Later, Noah plans to present it to love interest, Chloe, for Christmas. Will Meena silence him for good before he gets the chance?

Or would framing him for Leanna’s murder be more up her street? Either way, it looks like Noah is heading for a whole lot of trouble.

Why does Meena have Leanna’s ring?

Murderous Meena pushed Leanna from a bridge in July and villagers still believe her death to be a tragic accident.

But Meena killed Leanna, fearing she was about to expose her for killing former best friend, Nadine.

Emmerdale fans said back in the summer that keeping Leanna’s ring would be Meena’s downfall.

“Whoever recognises that Meena has Leanna’s ring will be next on the list,” said one fan.

Another added: “I hope someone clocks on that Leanna isn’t wearing the ring and Meena has it!”

“Meena needs to hide that ring somewhere else,” said a third.

And a fourth tweeted: “Why would Meena steal the ring Jacob gave Leanna. Would that not be incriminating?”

Whatever happens, Meena looks set to be outed over Christmas as her sister Manpreet closes in on her too.

And the soap has already teased the sisters’ clash with a showdown aired this week.

After declaring a fresh start and no-more secrets with former lover Charles Anderson, Manpreet decided she had to come clean about Meena texting Ethan pretending to be Manpreet.

Will Meena be caught in Emmerdale at Christmas?

But never take on calculating Meena and expect to win, because she immediately jumped in and told Charles Manpreet had sent the messages.

Meena wasn’t even sorry and tried to defend herself: “I sent those texts to help you.

“Don’t blame me for protecting my corner if you try and use them against me.”

Manpreet hinted that she knows exactly what Meena’s capable of as she revealed she knows “the depths to which you’ll sink”.

Meena greeted that comment with a smile and told her sister she did warn her to keep her mouth shut.

“You and me, Meena, we’re done,” said Manpreet.

But Meena really laid into her sister then: “You’re a homeless, husband-less mess, who just talked herself out of her own last desperate attempt at happiness.”

Tearful Manpreet asked her sister: “When did you start hating me this much?”

The pair will come face-to-face again soon after Manpreet finds out the truth about Nadine.