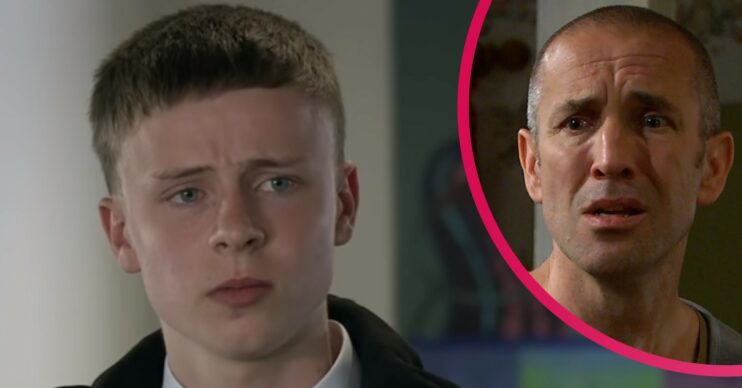 How old is Emmerdale teen Samson Dingle now? Does Meena murder him?

He's being eyed up by Meena as a new victim

Samson Dingle in Emmerdale has unwittingly got himself into a whole world of trouble as he crosses Meena Jutla.

As she prepares to do whatever it takes to keep her secrets safe, Samson is in her firing line thanks to cousin Noah Dingle.

The last year has seen Samson become very grown-up and get involved in more storylines.

But how long has he been on the soap? How exactly is he a Dingle? And just how old is he?

How old is Samson Dingle now?

Samson Dingle was born on 12 January 2006. That makes him days away from his 16th birthday.

But with Meena on the prowl, will he make it?

Who are his parents?

Samson is the only child of Sam Dingle and Alice Dingle. Sam is the son of Zak Dingle, making Samson his grandson.

Cain Dingle is Samson’s uncle and Belle Dingle his aunt.

Sam is now remarried to Lydia Dingle, who is Samson’s stepmum.

What happened to Alice Dingle?

Sadly, Samson lost his mum Alice when he was just eight months old.

Alice was diagnosed with cancer while pregnant but refused to terminate her pregnancy in order to begin chemotherapy.

Instead she began treatment after Samson was born prematurely.

Tragically, the treatment was unsuccessful. With a terminal diagnosis, Sam helped Alice end her life in a controversial euthanasia storyline.

Samson Dingle is played by Sam Hall, who was born in 2004, making him two years older than the character he plays.

He is the fourth actor to play Samson, taking over from Charlie Pell in 2009.

What has been Samson’s biggest storyline?

Samson’s first major storyline was when Noah asked to use his urine sample in order to be accepted into the military.

Sam reluctantly did so, only for Noah’s mum Charity to find out and report the situation to the assessment centre.

However, his biggest storyline came in May last year when he took on thugs from his school.

Stepmum, Lydia, had had her identity stolen and used in a pension scam. Some local lads attacked and mugged her in revenge for what they believed she’d done.

Samson witnessed the attack, but didn’t intervene, however it soon became clear he knew the boys involved.

He ended up taking a crowbar to school and chasing the lads with it to get revenge.

Does Samson die in Emmerdale?

Now Meena is after him because he inadvertently has Leanna’s ring.

Meena stole the jewellery as a trophy after she murdered the teen, but Noah found it on the floor at the B&B.

He swiped it and gave it to Chloe as a Christmas present, but knowing Meena’s on to him, he’s planted the ring on unsuspecting Samson.

Meena, clutching a screwdriver, will do whatever it takes to get it back…