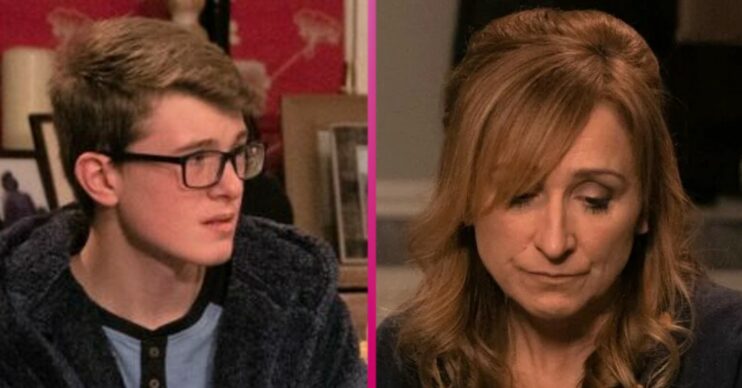 Emmerdale spoilers: Dark plot ahead for Arthur and Laurel?

Arthur makes his feelings about his mum perfectly clear

Emmerdale spoilers for next week reveal Arthur is angry at Laurel over her break-up with Jai.

As he lays into her, Laurel is gutted by his accusations. Is Arthur heading down another dark path?

Or can Jai step in and protect Laurel from her son?

After the news about Marlon’s stroke spreads, Jai wants to support Laurel who has been left shaken by it.

He ends up babysitting the children and realises just how much he misses life with his family.

Meanwhile, realising the affect their break-up is having on Arthur, Laurel tries to protect his feelings by lying to him.

She wants to make sure he doesn’t hate Jai so doesn’t tell him the real reason they broke up, instead she fabricates a different story.

Laurel’s attempt to protect her son and her former partner backfire spectacularly when Arthur lashes out.

She has already had to deal with Jai, who believes they can put the past behind them and reunite.

Laurel ejects Jai from the house and he’s horrified to realise the depth of her pain.

But things only get worse when Arthur is frustrated by his mum throwing Jai out.

As he unleashes his anger, he accuses Laurel of sleeping with someone else. She’s upset and gutted her son can think so little of her.

But it’s Jai who sets Arthur straight about their break-up and the teen is left feeling guilty. But will he apologise to his mum? Or is this the start of another dark plot for Arthur?

If Arthur does go bad again, it wouldn’t be the first time.

He waged an awful bullying campaign against Jai’s son, Archie, when he didn’t want a new brother.

Poor Jimmy King even got the blame for some of Archie’s injuries before the truth came out about Arthur’s behaviour.

He even told Laurel he hoped she would die.

But given everything he’s been through in his young life: being swapped at birth, the death of his father, Ashley, following a battle with early onset dementia, and Laurel’s rebound romance with Bob Hope, maybe Arthur should be given a bit of a break?!

He’d finally come round to the idea of Laurel and Jai, and now he’s being forced to accept yet another loss in his young life.

But given his history, just how far is he likely to go this time?