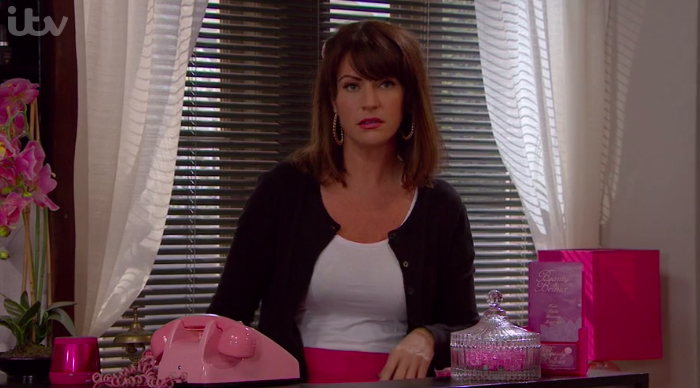 Where had Kerry, played by Laura Norton, disappeared to?

Emmerdale fans were furious last night when ‘killer’ Kerry Wyatt returned to the village – without any explanation of where she’d been for the past two months.

Viewers of ITV soap Emmerdale are not big fans of the village resident after her part in the death of Frank Clayton, and expressed their disappointment at her reappearance.

Others were baffled as to where she’d been since early January, when she was last seen in the village!

Kerry is back and not in prison or dead.

On Wednesday night (March 18), Kerry reappeared at Brenda’s coffee shop and put her foot in it when she said Marlon looked “rough”.

She later turned up at the Beauty and Bernice salon as if she’d never been away and immediately started gossiping about Marlon’s misfortunes.

As Mandy Dingle painted Brenda Walker’s nails, Kerry revelled in Marlon‘s misery, who recently disowned the Dingle family after his spell in prison.

Although the scene was brief, fans were quick to express their feelings…

One tweeted: “Kerry is back and not in prison or dead #Emmerdale.”

Another said: “OMG is that Kerry?! Forgot what she looked like! #Emmerdale.”

A third typed: “Still find it amazing Kerry still can crack a smile after the involvement in Frank’s death!”

“Oh, Kerry the Killer is back in town,” remarked another, and one more said they weren’t happy to see her “because she has not paid for what she did.

“And if her redemption arc comes on the back of Vanessa’s storyline, then it will be an insult to Vanessa, her principles and to Gwandad Fwank. Kerry has to own up to accidentally starting the fire. Then we can forgive her #Emmerdale.”

OMG is that Kerry?! Forgot what she looked like! #Emmerdale

Still find it amazing kerry still can crack a smile after the involvement in frank’s death! #emmerdale

To top it all we now have Kerry back #emmerdale pic.twitter.com/LywijT0hJa

Looks like she’s been on holiday. All that tan.

The pair accidentally started the fire which caused Frank’s death when they broke into the safe and stole the money from Bernice Blackstock’s fundraiser.

The pair wanted the money to help Amy pay off a debt to an old acquaintance in Belfast.

Frank gave his life trying to save daughter Tracy from the blaze.

Soap fans watched in disgust as Kerry and Amy kept quiet about their involvement and even tried to pin the blame on Frank himself.

They also comforted Amy and Vanessa about the loss of their beloved dad, even though they were partly responsible.

Emmerdale airs Monday to Fridays at 7pm on ITV.

Do you think Kerry can be redeemed? Leave us a comment on our Facebook page @EntertainmentDailyFix and let us know what you think?