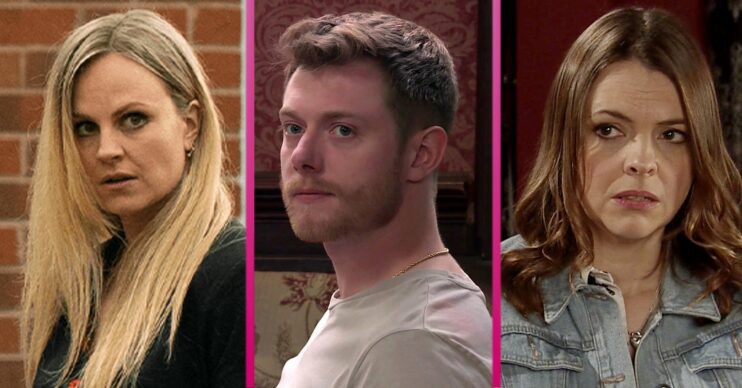 These secrets will have to come out sooner or later

Coronation Street holds some huge secrets in its cobbles.

There have been murders, pregnancies and awful crimes committed in the shadows.

It might not be a secret that Tracy killed her boyfriend Charlie Stubbs – but she’s got Weatherfield convinced it was self-defence.

The truth that she carefully and meticulously plotted his murder over months has only ever been revealed to the viewers and to her late mum Deirdre.

What would Amy say to hear her mum’s a real murderer?

She’d probably be fine with it, to be honest.

If you hadn’t been recently reminded of his staircase histrionics with Max Turner, you’d be forgiven for forgetting that Daniel has form.

Back in 2017 Daniel decided to try and kill his own dad by shoving him down the stairs.

Now half the family already know about this and agreed to keep quiet.

But the community doesn’t know what Daniel is capable of.

It’s a wonder Sarah Platt hasn’t collapsed under the weight of her own hypocrisy on Coronation Street.

If she wasn’t raging at ex Gary for secrets, then she’s annoyed at her husband Adam Barlow’s past.

His past, to be clear, involves consensual sex with more than one woman.

He hasn’t, to the best of our knowledge, dated a drug dealer, fought him, killed him, stuffed him in a storm drain and installed his mother over it in a granny flat.

Sarah has though. Not that she’ll be confessing to that little secret any time soon.

For a former soldier, Gary’s not great at coping with pressure, is he?

And then he killed Rick Neelan to stop him killing him.

They don’t even remember Rana.

It’s not up there with murder or attempted murder, but hiding being pregnant before disappearing abroad is a good soap secret.

And it opens up a multitude of ‘Alina’s about to pop’ puns for Corrie.

Having ended her relationship with Tyrone, Alina told him she was pregnant.

And then she told him she was lying before leaving for good.

Only surprise – she wasn’t lying and somewhere in Romania is a little Tyrone Dobbs waiting to be born.