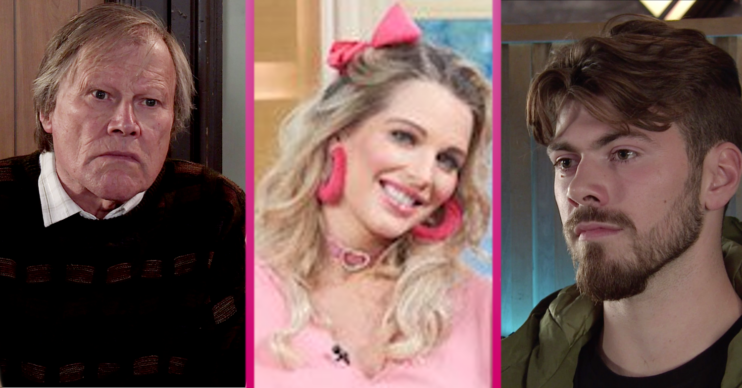 From Roy Cropper to Rosie Webster, here's who's coming and going in Weatherfield in 2022

Coronation Street in 2022 is shaping up to be just as busy and eventful as 2021 has been.

Here’s our round up of everyone who’s left Weatherfield, who’s arriving and who could be on their way back.

After leaving baby Glory home alone, horrifying Bernie Winter (who, let’s face it, isn’t in the running for Mum of the Year herself), Grace did a dodgy deal with her in-laws.

She demanded £20,000 in exchange for leaving Glory with dad Michael Bailey. We don’t think she’ll be back.

We saw him take his final breaths in front of Zee and sister Alya, who left him to die. But while Hashim won’t be back, the after-effects of his death are going to be felt for a long time as Alya struggles with her guilt.

Now Curtis’s secret is out and everyone knows that he’s not dying after all. He left Weatherfield after the wedding disaster, but made a surprise appearance on New Year’s Eve.

Emma saw him at the hospital and tried to apologise for accusing him of stealing the charity cash.

Curtis made her believe he was at the hospital for an appointment with his psychologist, but it soon became clear he was back at the cardiology department instead.

Emma realised there was nothing more she could do to help him and they said their farewells.

But will Corrie really leave this storyline here? Could Curtis return again and this time get the help he clearly so desperately needs?

After lying to the police to protect Abi, Roy was stricken with guilt.

He packed his bags, signed everything over to niece Nina and fled to South America.

But Roy returned on Christmas Day to help Nina who has been struggling with PTSD and panic attacks.

Roy told her he’d let her down by leaving and revealed he was back to help her. Will he stick around for good this time, though?

We saw Leo back in Super Soap Week when he was working on the sink hole that took Johnny Connor’s life.

Then he was dating Jenny and seemed smitten. But Jenny’s grief at losing her ex-husband put things on hold.

Now, though, Leo’s coming back to Coronation Street. Could he be who Jenny needs to help her through the dark times?

The Webster sisters have been off having adventures while actresses Helen Flanagan and Brooke Vincent took time out to concentrate on their young families.

But they’re often mentioned by mum Sally Metcalfe and dad Kevin Webster and we’re hoping one – or both – of them might arrive home this year.

In December, Helen told OK! that she will return to the cobbles one day, but her “kids are always going to be my number one, though, so it will be what fits around them.”

We loved Sharon showing up in the Street earlier this year.

Now she’s taken over nephew Harvey’s drug business and we are desperate to see the all new lady boss Sharon back on the cobbles. Will Corrie make it happen?

Sean Tully‘s son Dylan came to stay for a while and proved a popular addition to the Street.

Could he return on a more permanent basis?

Newcomers to Coronation Street in 2022

Sarah Barlow was thrilled when she hit it off with new friend Lydia Chambers, only for things to get totally awks as husband Adam realised he’d had a fling with the newcomer back when they were both at university.

Fans are convinced that means Adam could be the dad of Lydia’s son, Finn, but is it more complicated than that?

Weatherfield’s answer to Hyacinth Bucket was humiliated when she revealed her true colours to the revelers at son Phill’s party.

But that wasn’t the last we’re going to see of Mimi. At least, we hope not – she may be an awful snob, but she’s very entertaining!

Zeedan’s ex-wife came to Coronation Street to apologise for the awful behaviour of her dad and brothers.

Now Marrium is eager to forgive Zee for the cheating that caused their break-up, but she doesn’t know that he left her dad to die.

The sensible thing would be for Zeedan to send her packing. But when was Zee ever sensible?