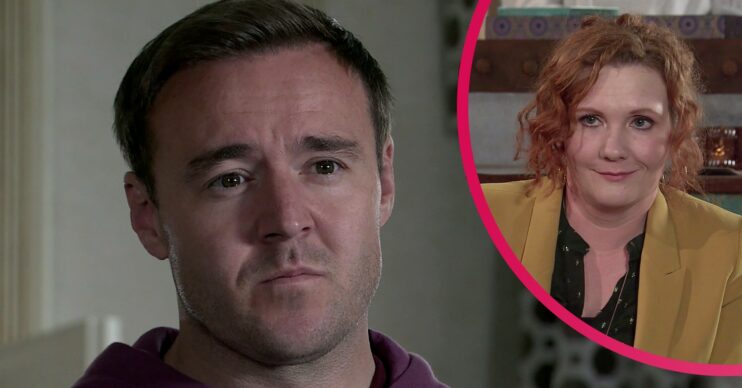 Tyrone Dobbs in Coronation Street: What’s next for the former family man?

The mechanic's had a mid-life crisis

Tyrone Dobbs in Coronation Street shocked partner Fiz Stape and viewers when he dumped his family for a steamy romance with younger woman Alina Pop.

But now Alina’s popped back to Romania, leaving Ty licking his wounds and contemplating a future without Fiz.

But his ill-advised affair with Alina was just the latest in a long line of dramas for the Weatherfield grease monkey.

Tyrone Dobbs in Coronation Street is played by actor Alan Halsall. He joined the show back in 1998 as a teenager and he’s been playing the role ever since.

Before joining Corrie, Alan had appeared in shows including Queer as Folk and Heartbeat.

Alan was married to co-star Lucy-Jo Hudson and the pair share daughter Sienna-Rae, who was born in 2013.

Now Alan is happily loved up with Tisha Merry, who played Steph Britton in the soap.

Tisha and Alan went public with their romance back in 2019 after their friendship blossomed into something more.

Tyrone Dobbs arrived in Coronation Street and began training as a mechanic alongside Kevin Webster. He moved in with Jack and Vera Duckworth and became like a surrogate son to them.

He had romances with Maria Sutherland and briefly with Fiz before getting engaged to Molly Compton.

After they tied the knot, Ty and Molly’s relationship ran into trouble when she began an affair with Kevin Webster.

She left Tyrone for a while but when she found out she was pregnant, she moved back home and the pair were thrilled when little Jack arrived. But Tyrone wasn’t aware that the baby could be Kevin’s.

He was devastated when Molly revealed the truth shortly before she was killed in the dramatic Corrie tram crash in December 2010.

Kevin and Sally split, and Kev took on the care of his son.

Tyrone Dobbs in Coronation Street met policewoman Kirsty Soames in a bar and the pair quickly fell in love.

But Kirsty had a dark side, firstly warning Ty to stay away from friend Fiz, and then threatening another friend Tina McIntyre.

Kirsty got pregnant but her erratic temper continued to cause problems for poor Ty and she began physically attacking him.

And when baby Ruby was born, Kirsty continued abusing Tyrone. She was jealous of other women and resented him giving up work to care for their daughter. She eventually convinced everyone that Ty was abusing her and he went on trial.

But Kirsty ‘fessed up to her crimes in court, Tyrone was released and she went to prison instead. She died recently and Tyrone went to her funeral.

Tyrone and Fiz and the girls

Tyrone and Fiz have been through all sorts of drama since they blended their family. Little Hope was diagnosed with cancer and the family’s determination to have a perfect Christmas plunged them into financial difficulties.

And later, Hope’s behavioural troubles drove a wedge between Fiz and Tyrone.

Tyrone fell for younger woman Alina Pop and the pair started a romance, breaking Fiz’s heart in the process.

Their relationship moved fast and Alina was soon pregnant. But when Hope set fire to the new baby’s cot, Alina suffered a miscarriage.

The problems soon led to Tyrone and Alina breaking up and she left Weatherfield – though fans are convinced she is once again expecting Tyrone’s baby.

Now Tyrone’s coming to terms with having lost his family and his new woman. But what’s next for the miserable mechanic?

Now Fiz is happily loved-up with Phill, Tyrone feels out in the cold.

But on Wednesday, November 10, he meets Isla. She’s a mum to a young daughter and is impressed when Ty defends Hope after another child’s mother doesn’t invite her to a party.

Isla asks Tyrone out for a milkshake with the girls, then on a proper date. Tyrone is thrilled, but all might not be as it seems…

Next week, Ty and Isla have their date in Speed Daal – but it’s not long before they’re interrupted by Isla’s husband, who punches Tyrone!

Fiz later assure Tyrone Isla has a reputation and it’s not his fault, but will Tyrone’s bruised ego heel as fast as his bruised face?

What does the future hold for Fiz and Tyrone?

Corrie fans are keen for Fiz and Tyrone to reunite.

Many don’t think her fella Phill is as nice as he seems – and some even think Maria will try to steal him!

But Christmas spoilers have revealed Fiz and Phill will take pity on Ty and invite him to spend Christmas with them and the girls.

But with the festive cheer flowing Tyrone takes it too far and kisses Fiz. Will she respond? Or is she really and truly done with her ex this time?