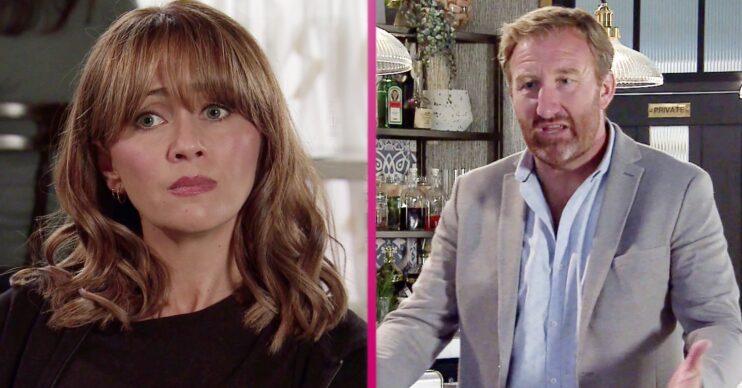 Will history repeat itself?

After her split with Tyrone, Fiz began dating Phill. She ended things with him, however a couple of weeks ago they started dating one again.

Recently Maria has been campaigning to make the street residents parking only.

This week she discovered council plans to bulldoze the playing fields at the Red Rec to build a new road.

In last night’s scenes (Wednesday, November 4) Maria organised a demonstration outside of the council building.

After his meeting, Phill took Maria for a coffee to hear what she had to say.

He soon suggested that she stand to be a councillor in the next elections.

However fans think that Maria will end up making a move on Phill, even though he’s with one of her close friends.

#Corrie Maria is known for bedding her mates fellas so yep it’s only a matter of time before she ends up with Phil!

Oh is history going to repeat itself and Maria going to get it on with her best mate Fizz's new bloke, like she tried to with Tyrone? #corrie

Fans were quick to point out that Maria has a history of chasing after her friend’s boyfriends.

In 2014, Maria went on a downward spiral after she caught her boyfriend Marcus sleeping with Todd Grimshaw.

She began to become obsessed with her ex, Tyrone, who was with Fiz at the time. When Tyrone’s abusive ex-girlfriend Kirsty was released from prison, he opened up to Maria.

However she began sending Tyrone threatening text messages, making it seem as if they came from Kirsty.

Police were soon able to confirm Kirsty was now living abroad and the text messages were coming from a UK number.

It was soon revealed Maria was the one sending the messages and she tried to convince Tyrone to leave Fiz and be with her.

A few years ago, Maria also had an affair with Aidan Connor – who was engaged to her friend Eva Price.

In 2019 she started dating Gary Windass and the two got married last year.

They ended up briefly splitting up, however they are back together.

A few weeks ago, Maria was horrified when her son Liam collapsed, struggling to breathe.

What do you think of Maria’s storyline? Leave us a comment on our Facebook page @EntertainmentDailyFix and let us know what you think.