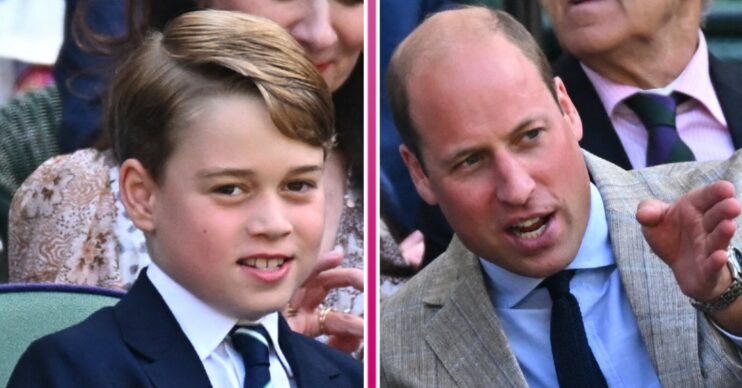 Prince George delighted royal fans with his recent attendance at Wimbledon with his parents Prince William and Kate Middleton.

Despite the tennis action, eyes were also on the Royal Box as the Cambridges sat together for the thrilling match.

Admirers couldn’t get enough of George‘s interactions with his parents at Centre Court. He also melted hearts when meeting winner Djokovic behind the scenes.

And there was also an engaging ‘dad’ moment with William that also captivated observers.

However, according to one royal expert, George at one point “refused to follow his father’s advice”.

Correspondent Neil Sean claimed on YouTube that George turned to his dad in the Royal Box to say he was “too hot”.

According to reports, he suggested William responded by saying George could take his jacket off.

However, Mr Sean reportedly claimed George “refused” to do so.

And apparently that was because George preferred to remain in full dress, just like his father.

‘This is what George will have to get used to’

Mr Sean said: “[Prince George] liked to follow suit about what his father is doing.”

Furthermore, the reporter dismissed apparent criticism about the young royal being dressed so formally in hot conditions.

He wanted to be like his dad and keep his jacket on.

“This is tradition. This is what George will have to get used to.

“He’s representing our monarch even at this very young age. But more importantly – what all little boys want to do – he wanted to be like his dad and keep his jacket on.

“When he got in the car of course, things were a little bit different.”

Where were Charlotte and Louis?

Despite enjoying a family day out, George’s younger siblings did not join him and their parents in the Royal Box.

This was reportedly due to the fact Louis is ‘too young’ for Wimbledon admission.