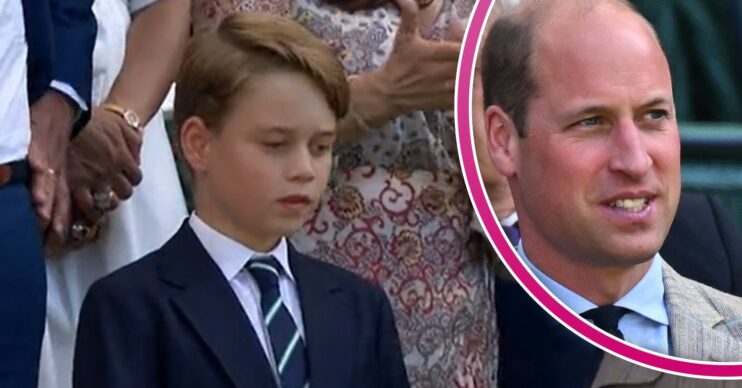 The Cambridges watched the final from the Royal Box

George, eight, looked to be enjoying every moment of the tournament as he sat in the Royal Box alongside his parents.

The young royal also got the opportunity to meet champion Djokovic backstage following the match.

The sweet moment was seen during BBC’s coverage as George, who looked smart in a suit for the outing, got to hold Djokovic’s trophy.

However, according to a royal expert, William had a bit of an “embarrassing dad moment” with George and the trophy.

Russell Myers appeared on Lorraine on Monday and discussed the moment.

He said: “[George] got to hold the trophy. Bit of an embarrassing dad moment, William telling him, ‘don’t drop it [the trophy]!’ But I think he did rather well.

“He’s quite well in front of the cameras.”

Stand-in host Carol Vorderman said of the trophy: “[George] did say it was quite heavy!”

Royal fans loved seeing George out with his parents at Wimbledon on Sunday.

However, many expressed concerns about his attire.

Some were worried about him wearing a suit in the heatwave.

One person said on Twitter: “Why is Prince George in a SUIT at Wimbledon on a hot day?? He’s a child at a tennis tournament.”

Another added: “It’s too hot for a suit today, seriously let the kid have some fun and be more relaxed…”

However, others defended the outfit choice as one tweeted: “Prince George is 8 years old & has a mind of his own.

“It’s possible that HE likes wearing a suit & tie, like his dad. It’s also possible HE wanted to keep his jacket on.

“People should stop commenting based on their own assumptions, thinking they are the truth. They aren’t.”

Another added: “It’s the dress code for the Royal Box.”

What did you think of George wearing a suit? Leave us a comment on our Facebook page @EntertainmentDailyFix and let us know.