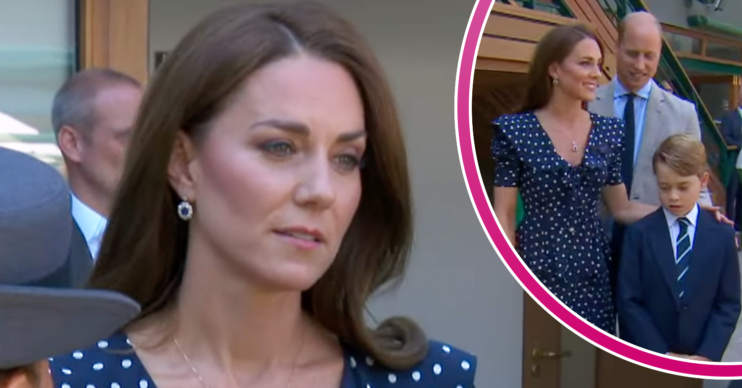 It's set to be scorching today

Prince George has delighted royal fans by making a surprise appearance at Wimbledon.

The eldest son of the Duke and Duchess of Cambridge, who turns nine later this month, arrived with his proud parents at lunchtime today (July 10).

He’ll watch the action from the mens’ singles final from the Royal Box.

It’s Prince George‘s first time at the tournament – and his surprise appearance has delighted fans of the Cambridges.

George wore a smart navy suit and white shirt as he arrived with his parents.

“Such a wonderful surprise to see Prince George at Wimbledon with his parents for the very first time.

William looked cool, calm and collected in a light grey suit, while Kate wore a beautiful navy and white polka dot dress for the occasion.

George delighted tennis fans as he waved to them from the bridge as the family were escorted to their seats in the Royal Box.

His younger siblings Princess Charlotte and Prince Louis were not in attendance to watch the final.

George, Kate and William will watch as Nick Kyrgios battles Novak Djokovic for the title of Wimbledon champion.

“Prince George at Wimbledon!” squealed one royal fan upon hearing the news.

“Kate and William are stunning today! Sure it is a very special day for them as it is the first time at Wimbledon for Prince George!!” declared another excited fan.

“Hope you and Prince George have a lovely day!” another commented.

“Such a wonderful surprise to see Prince George at Wimbledon with his parents for the very first time,” said another.

However, others shared fears for George in the hot temperatures today.

“Poor little Prince George at Wimbledon for the men’s singles final wearing a jacket and tie! 30C temperatures!” they said.

“With heat warnings in place for all esp kids and elderly – why are @KensingtonRoyal trotting out George donned in suit, shirt and tie @Wimbledon?”  asked another.

A third commented: “Feel a bit sorry for Prince George having to sit through the Wimbledon mens’ singles final. It could go on for hours and in this heat too!!!”