Smitten Katie Price has described herself and boyfriend Carl Woods as an "unbreakable power couple".

Katie, 42, made the statement while sharing a new photograph of herself and Essex car dealer Carl, 31.

Posting the snap on their 'Adventures Of Katie and Carl' profile, Katie said: "Dreams exist, we are proof #powercouple #unbreakable #madeforeachother ❤️."

How did Katie meet Carl?

Katie began dating Carl in June but they are said to have been friends for years.

A mutual friend reportedly set the couple up romantically and she has since described him as her "Prince Charming".

Last week, the pair jetted to Turkey for a holiday with Katie's two children, Junior, 15, and 13-year-old Princess.

But the trip has been hit by disaster, after Katie broke both her feet while visiting a theme park.

Katie said she now won't be able to walk "for months" and put out a plea to fans to sort her a mobility scooter or wheelchair for her return to the UK.

Katie and Junior clear up rumours

On Saturday morning (August 1, 2020), the mum-of-five shared a new picture of her feet in casts.

The star snapped the picture while relaxing on a sun-lounger alongside a swimming pool at her Turkish resort.

Commenting on it, she joked: "Still going to enjoy the sun and create new tan lines 😂." 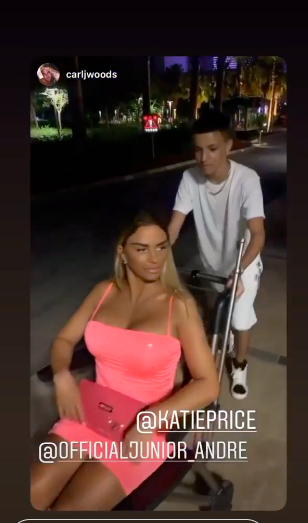 Katie has confirmed she and Junior were not 'partying' on Friday night (Credit: Instagram/ @KatiePrice)

She has also put paid to rumours that she and son Junior had spent Friday night partying.

It came after she shared a sweet video clip of Junior pushing her down the street in a wheelchair.

Clearing things up, Katie said: "Apparently, Junior, we were out partying last night, because you were pushing me in a wheelchair and I had a dress on."

Read more: Stacey Solomon says Joe Swash is 'on a mission to make her pregnant'

Speaking on her Instagram stories, she then urged her son to reveal where they had really been.

Junior said: "We thought it was going to be some five star restaurant. There was about 100 chairs and no one there.

How can we party when you're in a wheelchair?!

"It was a Friday night and no on was there. We think they got their food from a supermarket."

He added: "How can we party when you're in a wheelchair?" Katie replied: "Exactly, thank you, Junior!