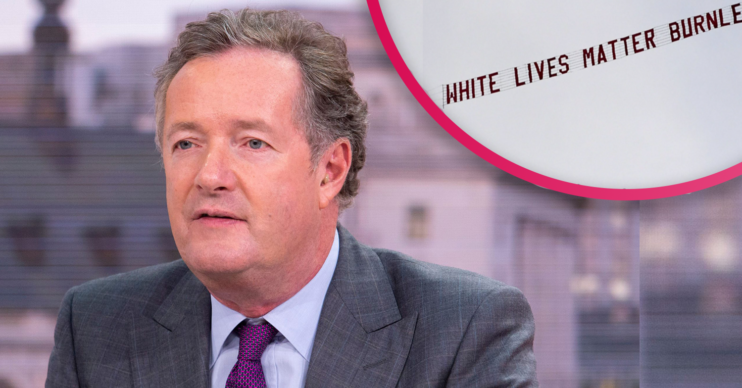 A private plane bearing the slogan flew over the Etihad Stadium during Burnley FC’s match against Manchester City yesterday.

It happened just moments after Premier League players took the knee in honour of the Black Lives Matter movement.

The discussion on GMB sparked “frightening” comments from viewers on Twitter afterwards.

One viewer tweeted: “Listen this is simple. If we allowed BLM to peacefully protest with banners EVERYWHERE, then what crime has this banner caused?

“Peaceful protest from the sky. We cant condemn this and not BLM. Your biggest issue is giving it all this media attention.”

Another added: “We have seen enough placards, graffiti, banners displaying blm, but we can’t have white lives matter, all lives matter.”

Moments later, a third wrote: “Whoever flew that banner is a hero.”

Those reading the reaction on Twitter were disturbed by some of the comments.

“It’s frightening how many people are either too thick, too ignorant or simply unwilling to understand the point that everyone who has condemned the banner is trying to make,” one explained.

A second viewer added: “You can not continue with this stupid thread of ‘white lives matter too’. It’s not about that ffs it’s about racism and supporting the black experience.

Reading some of the comments live on GMB, Piers Morgan admitted he was finding it “very disheartening”.

He said: “We’re getting so much reaction to this and a lot of it sadly is of the same kind of theme

“The Black Lives Matter movement says very simply that most black people do not have lives as easy as non-black people because they are discriminated against in all ways of life in society.

“It’s about ending racism in all its guises.”

Piers then added: “We had a powerful moment on this show with Andi Peters, who runs all of our competitions.

“When I asked him how you can have this big public push for diversity with Bafta for years and then all the nominations end up white, he said ‘Well piers, look around our studio – you won’t have noticed but I am the only black person here.’

“It was a powerful moment for me because I hadn’t noticed and he had. I felt that.”