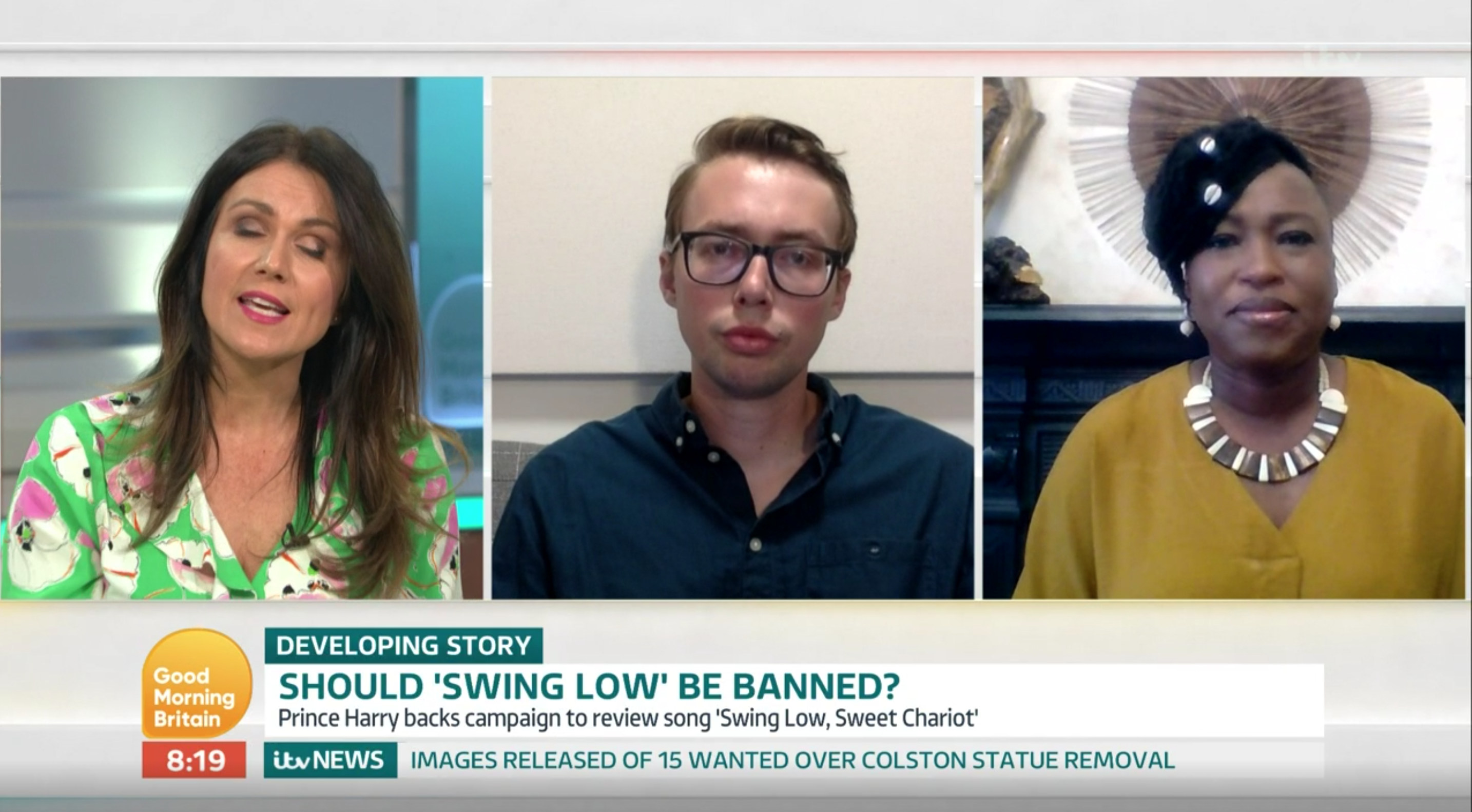 Presenters Piers Morgan and Susanna Reid made no reference or apology

GMB hosts Piers Morgan and Susanna Reid debated this morning whether the Rugby Football Union should discourage Swing Low, Sweet Chariot from being sung at games.

This followed news that the RFU is reviewing the 19th-century African-American song in light of recent Black Lives Matter campaign developments.

The presenters were joined by Dr Shola Mos-Shogbamimu and journalist Tom Slater. He argued that Swing Low should not be stopped from being sung at matches.

As the conversation moved on, Dr Shola spoke about how the N word was “racist” when used by white people.

‘It wasn’t ok back then. It’s not ok now.’@SholaMos1 believes it is right that ‘institutions and individuals take a step back’ to re-educate themselves amid the debate of whether statues or programmes should be removed and songs banned.@piersmorgan | @susannareid100 | #GMB pic.twitter.com/G65znHiDbj

She then said she didn’t use it, but proceeded to say it twice within a matter of minutes at around 8.30am.

Neither presenter made reference to it or gave an apology.

But many viewers were appalled by it, complaining on Twitter.

@susannareid100 cant believe what I just heard from dr shola, it’s ok for black people to use the n word as they have turned the word on his head in a positive way, it’s a friendship call, absolute nonsense, it’s a bad word that nobody should use.#twofaced

@GMB I think you need to pick your guests more wisely. Dr Shola dropping the N word twice and no one flinches, believing that black people can still use it but as soon as a white person uses it, it is deemed racist and we need educating. The double standards are astounding #GMB

@piersmorgan just watched swing low debate. Have to say , was Dr Shola defending black use of the n word? I find it deeply offensive whoever uses it and rap stars shouldn’t have any more right to use it .

I thought @SholaMos1 made an excellent widely believed point. Many have reclaimed the term. Not to dissimilar to the gay community adopting “queer”. Heterosexual people shouldn’t use it, but they do. Its one way of countering intended offence. https://t.co/cVAgSp8sUC

The song Swing Low, Sweet Chariot was first sung at Twickenham rugby stadium in 1987 for Martin Offiah, an England player of Nigerian descent, who was nicknamed “Chariots” due to his speed.

The lyrics were written by freed Oklahoma slave, Wallace Willis.

The RFU told the Sunday Times it wanted to educate fans who did not know the song’s “origins or sensitivities” so they could make an “informed decision” about singing it.

Prince Harry has backed the move, with his spokesman telling the paper: “The Duke is supportive of the comments that the RFU made this week regarding the review and he will follow the lead of the RFU on the matter.”