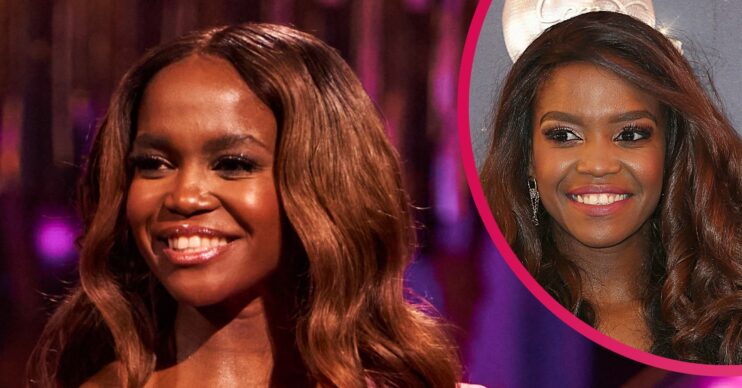 The former Strictly pro is the show's host

Romeo & Duet viewers have been left frustrated with show host Oti Mabuse and her shouting.

Many took to Twitter to voice their annoyance at the star who fronts the ITV dating show.

In fact, some are stunned the former Strictly dancer gave up her place on the BBC One show for this.

Oti is hosting the dating show where romantic hopefuls are serenaded by four single singers in order to win a blind date.

But those watching at home don’t love the concept.

And many love Oti’s shouting even less.

“My God this SHOUTING Oti woman! And as for show Total DROS,” tweeted one.

“Does Oti ever stop shouting? Unfortunately subtitles don’t work for this type of show so finger on the mute button,” stated a second.

A third agreed, more politely: “Don’t shoot me because she’s undoubtedly a lovely but Oti Mabuse’s voice really does grate when she’s screaming out the TV non stop as a host.”

Oti Mabuse’s voice is what I’d imagine a headache would sound like.

This programme is an absolute freak fest.

Just waiting for Paul and Pauline Calf to walk on. #romeoandduet #itv pic.twitter.com/yqFzpUPOaA

THANK GOD THAT OTI WOMAN DOSE NOT LIVE NEXT DOOR TO ME.!! If she is this LOUD on tv I can’t imagine what she could be like in a Bad Mood…!!! FFS #RomeoAndDuet @itvpresscentre

As well as hosting Romeo & Duet, Oti was also a judge on this year’s Dancing On Ice.

The dancer was a hit as she replaced John Barrowman on the panel.

Fans worried she was jumping ship to ITV and sure enough, she announced earlier this year she had quit Strictly Come Dancing after seven years.

A statement from the BBC read: “Oti has been a truly wonderful part of Strictly for the past seven years.

“Her energy, creativity and talent have contributed to so many of the show’s most memorable moments.

“She will be hugely missed, not only by viewers, but the entire team.”

Read more: Who did Harvey cheat with on Made in Chelsea?

It continued: “She leaves a dazzling legacy behind her, as the only professional dancer to lift the Glitterball Trophy in two consecutive years.

“We couldn’t be prouder of Oti and what she has achieved.

“She will always be at the very heart of our Strictly family and we wish her every success in her already bright future.”

Meanwhile, Oti  also posted the news to her Instagram.

She wrote how it was “never easy to say goodbye” and that she was “honestly so grateful to the BBC and will always remember that Strictly and BBC brought me to the UK – which I now call home and I have learnt and grown so much.”

The star continued: “I can’t put in to words how difficult this decision has been, but I have decided not to return for the next series.”

Romeo & Duet airs on ITV on Saturdays at 7pm.