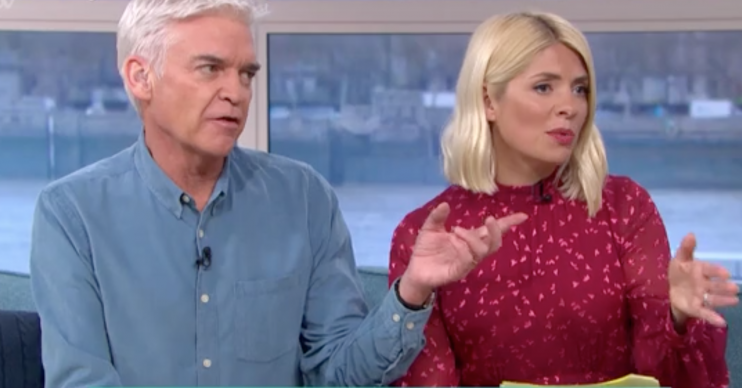 TV presenters Holly Willoughby and Phillip Schofield rushed to intervene as a discussion on This Morning earlier today became a little too heated.

Tensions rose as Trisha slammed some press coverage of the couple as being “basically racist and misogynistic” – but Matthew felt other matters are also connected to how the Duke and Duchess of Sussex are perceived.

Trisha said: “The royals, let’s say Meghan and Harry, the vitriol towards them. It’s basically racist and misogynistic stuff. And I think that clouds a lot of the issues.”

Matthew focused on criticism of Harry and Meghan’s decision not to publish pictures of newborn baby Archie after receiving public money to pay for the security at their wedding.

He claimed: “You don’t think taking £20 million of public money [for their wedding] and then not giving the public the thing that the public wants…”

I think we know what is actually racist language and what isn’t.

Trisha cut in and countered with: “So then you call them a racist after that? That’s my point!”

However, Matthew contended he has also been hit with accusations of being racist just for bringing up issues surrounding the couple.

Read more: Alison Hammond fuels rumours she could be a performer on The Masked Singer

Shrugging and holding up his hands, he continued: “I’ve seen on Twitter when I raise issues like that… then I get called a racist.”

Phil and Holly immediately shut the clash down at that point, talking over each other excitedly and gesturing that they should all move on.

“I think we know what is actually racist language and what isn’t,” Holly insisted, firmly.

Harry and Meghan also came under fire in the media for not ‘playing the game’ and keeping both Archie’s Christening ceremony and the identity of his godparents under wraps.

Holly and Phil’s decision to rein in a discussion is not the first time a host has has to step in over the last few days – last week Ruth Langsford was compelled to put a vegan activist in his place after he constantly interrupted everybody else.