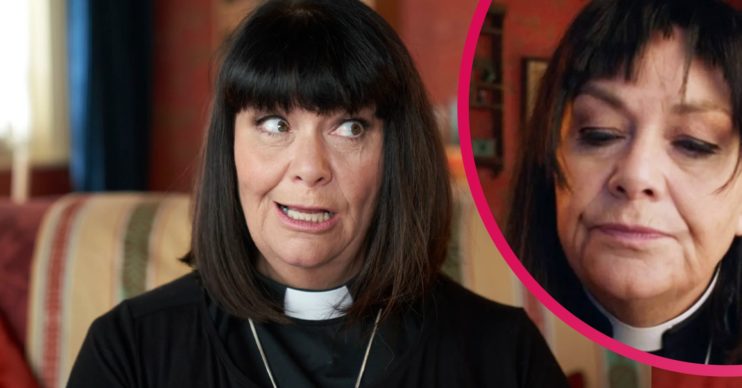 Vicar of Dibley in Lockdown 2020 received complaints and now the BBC has defended the new run.

The first episode, which aired Monday evening (December 7), came under fire from viewers rankled by references to other sitcom characters.

Some of those watching at home apparently took offence at the likes of Owen Newitt and Frank Pickle being mentioned.

Seemingly, that’s because the actors who played them have now passed away since the last series was filmed.

One person on Twitter moaned: “What a load of [bleep] that was! #vicarofdibley. Owen got more mentions than anyone and Roger Lloyd Pack’s been dead nearly seven years!”

Geraldine is a much-loved and well-established comic character.

Another person complained: “Anyone else watch #vicarofdibley and instead of laughing grow depressed that all the cast are dead?”

Not everybody loved return of Vicar of Dibley 2020

However, other social media critics felt the show was “an abomination” and “disappointingly unfunny”.

Two more 10-minute episodes are scheduled to air as part of the festive mini-series.

Geraldine also takes a knee and reflects on racial inequality.

Delivering her sermon, the character says: “I don’t think it matters where you’re from.

“I think it matters that you do something about it because Jesus would, wouldn’t he?

“Until all lives matter the same, we are doing something very wrong.

“We need to focus on justice for a huge chunk of our countrymen and women who seem to have a very bad, weird deal from the day they’re born.”

‘100 complaints made’ about upcoming Vicar of Dibley episode

Metro.co.uk reports the BBC has made a statement after already receiving ‘more than 100 complaints’ about yet-to-be aired episode.

They quote a statement: “In The Vicar of Dibley in Lockdown, Geraldine shares with her congregation her take on some of the key stories of 2020, including clapping for the NHS, the Black Lives Matter movement, lockdown, and school exams being cancelled.

“She is a much-loved and well-established comic character and will be seen processing the year’s events in her familiar outspoken and high-spirited way.”

Star Dawn French has also calmly responded to attempted furore over the issue stoked by the likes of Laurence Fox.