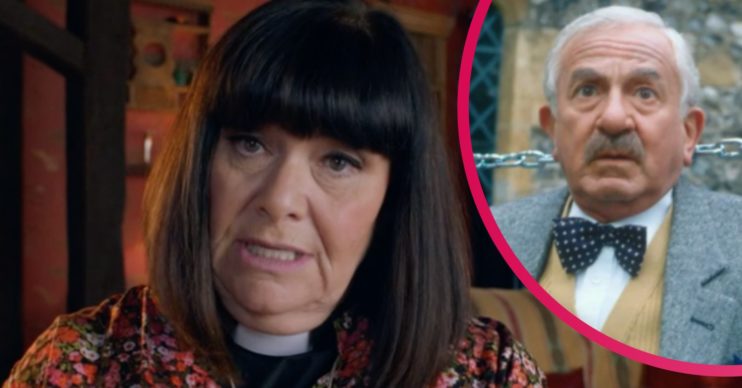 Some loved it, some found it 'weird'!

Vicar of Dibley In Lockdown has begun, but so far it has had mixed reactions from viewers.

Some viewers found it strange that Geraldine Granger, played by Dawn French, referenced characters played by actors that are now dead.

During the first 10-minute episode, Geraldine gave several shout outs to beloved characters from the classic show, including Owen Newitt, played by Roger Lloyd-Pack, who died in 2014 at the age of 69.

She also referred to character Frank Pickle, played by John Bluthal, who passed away in 2018 at the age of 89.

Which late stars were mentioned on the Vicar of Dibley special?

Some viewers took offence to their mentions, particularly as jokes were aimed at their characters.

One viewer took to Twitter, arguing: “It’s so weird seeing this #vicarofdibley thing given how much of the cast is dead, the show was the cast not just the vicar. Shouting at dead Frank is just odd….”

While another viewer claimed: “What a load of [bleep] that was! #vicarofdibley. Owen got more mentions than anyone and Roger Lloyd Pack’s been dead nearly seven years!”

How are viewers reacting to the new series?

Whereas a third viewer asked: “Anyone else watch #vicarofdibley and instead of laughing grow depressed that all the cast are dead?”

And another disappointed viewer chimed in with: “I am more annoyed with the #VicarOfDibley for pretending certain characters are still alive than any political protest. It could have been a beautifully poignant moment to pay tribute to the loss of the actors who played Alice, Frank and Owen.”

In a future episode, Dawn is expected to pay tribute to the late Emma Chambers, who played the show’s favourite character Alice Tinker.

However, not everyone is upset with the departed being mentioned.

In fact, several fans said they really appreciated the nods to some of their favourite characters.

One viewer praised: “Nice to see Geraldine back tonight. Also sweet the characters of Frank and Owen are still about keeping the memory alive. Hugo was daft as always. #vicarofdibley”

“Looking forward to hopeful homages of characters (and their actors) gone but not forgot.”