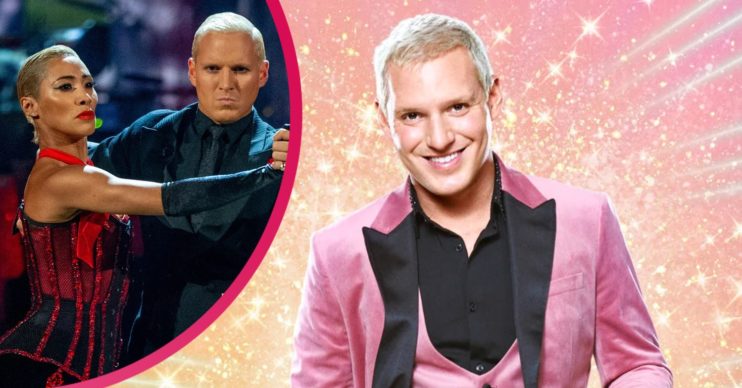 The reality star admitted it isn't all fun and games backstage

Strictly Come Dancing star Jamie Laing has revealed he “lost it” during a backstage meltdown with partner Karen Hauer.

The Made In Chelsea star, 32, admitted to freaking out ahead of performing the Samba during week four.

As the pair prepared to take to the Strictly dance floor, Jamie’s mind went black and he insisted he couldn’t perform the routine.

Thankfully, Karen was on hand to support her partner.

Opening up on the moment, Jamie told the Metro: “I had one before doing the Samba. You go backstage and you get like five or 10 minutes to warm up before your dance.

“And I was backstage, trying to remember my steps and I couldn’t remember any of them.

He concluded: “That was a bit of a meltdown, but we were fine.”

Jamie and Karen are set to perform a Quickstep and a Salsa during Saturday’s live semi-final.

However, the pair suffered a setback this weekend when they landed in the bottom two.

Judges Shirley Ballas and Craig Revel Horwood voted to save the reality star, which meant JJ Chalmers was sent home.

The decision to save Jamie didn’t sit well with some fans, who took to social media to voice their anger.

Taking to Twitter, one wrote: “Wtf? Jamie? He wasn’t even together with the steps!!! Very disappointing! A stitch-up for sure… He was always Shirley’s favourite… it is so obvious!”

Another complained: “What a fix. Jamie manifestly makes a mistake in the dance off but Shirley and CRH save him. Every year the BBC never fails to disappoint #Strictly.”

However, his loyal followers were soon out in force, showing their support for the MIC star and slamming those who had slated him because of his privileged background.

Defending the star, one wrote: “You did SO well Jamie!! Please don’t read the comments on the official Strictly pages, ignore them! You’re a good dancer who works hard and deserves your place in the semi final.”

Last week’s dance-off marked the third time Jamie had battled it out in bottom two.

He previously told The Sun: “My confidence definitely got shattered after being in the dance-off, I’m not going to lie. It wasn’t that high at the beginning anyway.

“It’s one of those things, Karen just said to me: ‘Look, we get to dance again’, and that’s so true.”