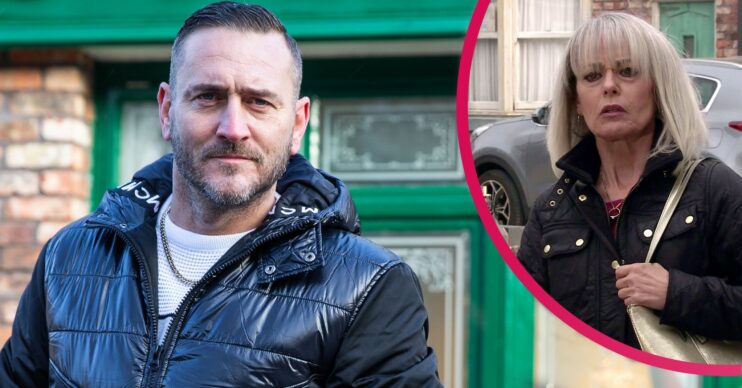 Who did Will Mellor play in Coronation Street? Will Harvey Gaskell ever return?

Harvey is a drug lord

Will Mellor may be the first name announced for Strictly Come Dancing this year, but who did he play in Coronation Street?

He walked the cobbles last year as Harvey Gaskell.

Drug lord Harvey was related to a Corrie legend.

But could he ever come back?

Read more: Will Mellor and another Corrie star sign up for Strictly Come Dancing

Who did Will Mellor play in Coronation Street?

Harvey Gaskell made his first appearance in 2021 and he was played by actor Will Mellor.

Harvey was a drug lord and the nephew of Sharon Bentley, who is Rita’s former foster daughter.

Speaking about joining the Corrie cast, Will said: “I’m honoured to be asked to come into Coronation Street, it’s such an iconic show and has been a huge part of my family life.

“When I started acting 32 years ago it was my mum’s dream for me to be in Corrie so I’m happy to finally be able to make it come true. It’s a Manchester institution and as a Manchester actor this is definitely a box ticked.

“Harvey is the first out and out baddie I’ve ever played. It’s a very different type of role for me so I’m looking forward to getting my teeth into the character and making some waves.”

What did Harvey do to Leanne and Simon?

In 2020, Leanne’s three-year-old son, Oliver, died. She was devastated and took time off work as she struggled to cope with her grief.

However while working for Dev, Simon became friendly with another delivery boy, Jacob.

He got Simon to deliver drugs and tricked him into thinking he owed them money.

Eventually Simon met Harvey, who was the leader of the drugs ring.

But when Leanne found out about Simon delivering drugs, she was horrified and took his place to do deliveries in order to protect her son.

However she decided to report Harvey to the police and began working with them.

Soon Harvey was arrested and taken into custody.

As Harvey had people on the outside and wanted Leanne and Simon killed, they were all put into witness protection.

Soon Rita got a shock when her former foster daughter Sharon turned up in Weatherfield, wanting to put the past behind them.

However it soon became clear to viewers there was another reason for her return – she’s Harvey’s aunt and was trying to track down Leanne and Simon for him.

In order to get Leanne’s boyfriend Nick back home, Sharon arranged for his son Sam to be kidnapped.

Soon Rita’s former stepdaughter Jenny figured out the connection between Sharon and Harvey and tried to warn Rita.

Rita set her up so she was eventually arrested.

In court, Leanne decided to give evidence but Sharon also gave evidence against Harvey and he was sent to prison.

However with Harvey in prison, Sharon ended up taking over his firm.

During Super Soap Week in October 2021, Harvey escaped from a prison van.

The vehicle crashed into a car carrying the Alahan’s, but Harvey left them for dead. He attacked Kevin Webster, who had come to rescue the family, and stole the breakdown truck. Harvey headed straight back to Weatherfield and Leanne.

He managed to track her to the Bistro. Leanne tried to escape, so Harvey tied up her hands and put tape around her mouth.

But when Harvey’s back was turned, Leanne made it out onto the street.

Leanne hid and eventually ended up in the House of Horrors that was on the cobbles.

However Harvey soon appeared and followed her down the street.

When he caught up to her, he went to hit her, but ended up falling through the ground.

But Harvey made it out of the sewers and found Abi Webster’s gun in the process. Abi had been planning to use it to kill Corey Brent, who had murdered her son, Seb.

Harvey took the weapon and began hunting for Leanne again.

However, in a tragic case of mistaken identity, he shot Natasha Blakeman, who was wearing the same Halloween costume as Leanne.

Natasha died from her injuries.

Meanwhile, Harvey still tried to kill Leanne, jumping into her car and forcing her to drive him to his pick-up point.

But Leanne was done being scared and crashed the car into a skip instead.

Harvey was taken back to prison, where he remains.

Could Harvey return to Coronation Street?

As far as we know, Harvey is still in prison and there are no plans for his return.

And now Will Mellor’s doing Strictly, it seems even more unlikely!

However, while a soap character is still alive there’s always a possibility of a return.

And after all, he’s escaped prison before…