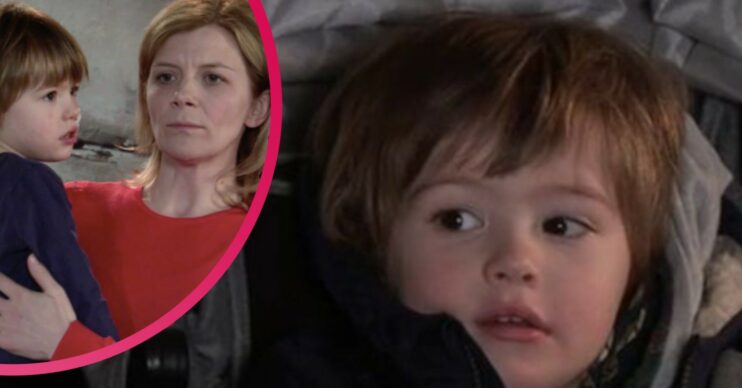 Oliver Battersby in Coronation Street: Who were his parents? How did the tragic tot lose his life?

Oliver Battersby in Coronation Street was the small son of Leanne Battersby and Steve McDonald who tragically passed away late last year.

Oliver’s been mentioned on screen a lot recently with Steve making a final push to hit £100,000 for his fundraising pot in Oliver’s memory.

So what happened to Oliver? And will his memory be tarnished by Curtis’s lies?

Old flames Leanne and Steve spent the night together when Steve had briefly separated from his then wife Michelle Connor.

When Leanne found out she was unexpectedly expecting – having thought she couldn’t have kids – she was shocked.

Steve had gone back to Michelle and Leanne had rekindled things with her ex-husband Nick Tilsley.

So she and Steve agreed to pretend their one-night stand never happened.

Along with Nick, they agreed that Leanne would tell everyone Nick was the dad and Steve would have nothing to do with the baby.

But after Oliver was born, Steve – who was still grieving for his and Michelle’s stillborn baby boy – couldn’t hide the truth any more.

He and Leanne eventually agreed to co-parent little Oliver.

Summer Spellman was looking after Oliver in spring last year when he had a seizure.

His condition worsened over the next few weeks, with more frequent seizures. His nursery were concerned he wasn’t hitting his development targets, too.

The little lad went through lots of tests and was heavily sedated to stop his seizures. He was eventually diagnosed with mitochondrial disease and his devastated parents were told he wouldn’t recover.

With Oliver having deteriorated and constantly sedated, the doctors gently told Leanne and Steve that it was time to withdraw his life support and let their son die.

But the heartbroken parents couldn’t do it. They wanted to find more options for treatment and fought against the hospital.

At an emotional hearing, the hospital’s decision was upheld. Though Leanne wanted to appeal, Steve realised it was time to let Oliver go.

And eventually Leanne agreed. Their little boy slipped away in his parents’ arms at the end of November last year.

Since then, Steve’s been on a mission to raise money for Oliver’s charity fund.

He took up running and cycling – which is how Curtis Delamere came into the family’s life – and the residents of Weatherfield pulled together to create a charity calendar, too.

But are their brilliant efforts at risk now?

With Curtis revealed to be a liar, and drunk Steve handing his future son-in-law his bank card to transfer the £100,000 they’ve raised to the charity, could Oliver’s memory be tarnished forever?