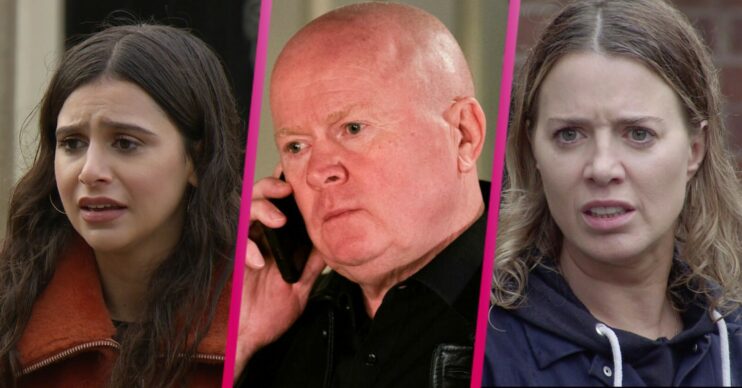 Why are the soaps not on today? When can you watch Coronation Street, Emmerdale and EastEnders next?

New Year's Day is usually full of drama in Soapland, but not this year

New Year’s Day is a typically dramatic affair in the soaps, but Coronation Street, Emmerdale and EastEnders won’t be on tonight.

In an unusual move all three big soaps decided to air on New Year’s Eve instead.

Things in the schedule often change over Christmas and New Year to accommodate festive specials. And soaps are generally a huge part of the line-up with big-hitting storylines to keep us hooked.

However, things are looking different as we begin 2022, with no soaps on at all tonight.

Read more: The big Emmerdale quiz – you’ll need to be a mega fan to smash it!

Why are the soaps not on tonight?

As January 1, 2022 falls on a Saturday, the soaps don’t air on weekends, so all three have decided to stick to that schedule pattern.

Although they made an exception last week for Christmas Day, when Corrie aired a happy Christmas, EastEnders had the wedding of Chelsea and Gray, and Emmerdale aired a huge explosion at the Woolpack, this weekend is back to normal.

What happened on New Year’s Eve?

In Emmerdale, there was a surprise proposal from Billy to Dawn. And Belle and Kyle were in serious danger after being abandoned by Ellis.

Meanwhile, Manpreet’s escape attempt was foiled by Meena, who has now decided to kill her sister.

In EastEnders, Phil took Raymond and went on the run, and Sonia refused to forgive Rocky.

When will the soaps be on again?

We’ll have to wait until Monday, January 3 for our next fix.

But the good news is that things should start to get back to normal from there.

Emmerdale returns to its 7pm slot, Coronation Street’s double bill sits back in at 7.30pm and 8.30pm and EastEnders returns to a full half hour at 8pm.

What is on TV tonight?

ITV are starting the New Year with a bang as they air the new series of The Masked Singer at 7pm.

The first lot of mystery celebs battling it out are Mushroom, Robobunny, Doughnuts, Chandelier, Lionfish and Firework.

Over on BBC it’s an outing for Doctor Who and Michael McIntyre’s The Wheel before new drama The Tourist begins at 9pm.

Can’t wait for more soaps gossip? Entertainment Daily has dedicated Coronation Street spoilers, Emmerdale spoilers and EastEnders spoilers sections to get your fix before the next episodes air.

Will you miss the soaps this New Year’s Day? Leave us a comment on our Facebook page @EntertainmentDailyFix and let us know what you think.