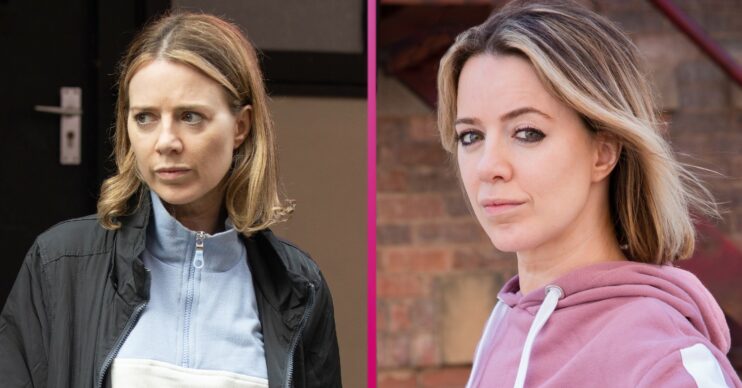 Abi Franklin in Coronation Street: What happened to son Seb? And does she have more kids?

Abi Franklin in Coronation Street – or Abi Webster as she is now she’s (finally!) tied the knot with Kevin, is the troubled former drug addict turned Street favourite.

After a troubled few years and the tragic murder of her son, Seb, Abi’s settled down with Kev and his son Jack.

But with so many skeletons in so many closets, will something be coming back to bite Abi, just when she thinks her life is back on track?

Abi is played by actress Sally Carman. She became a household name when she starred in Shameless as Kelly Maguire.

She also appeared on our screens in shows including Prisoners’ Wives, Moving On and Silent Witness, before landing the role of Abi.

Sally is engaged to co-star Joe Duttine, who plays Tim Metcalfe. The pair got engaged during lockdown and they’re planning a sparkly Christmas wedding.

Abi was mum to son Seb, and his younger twin siblings Charlie and Lexi. They lived with Abi’s abusive partner Darren – who was the twins’ dad.

Teenager Seb was doing his best trying to keep his family together, but Abi was not coping. When she finally threw Darren out, Seb was relieved, but Abi took an overdose, and was found by her small twins.

The twins were taken into care, Abi went to rehab, and when she returend to the cobbles she tried to get the kids back but failed.

In 2018, Abi came back to Weatherfield, and got a job at Kevin’s garage.

For a while things were better, until she was blamed for smashing up Michelle Connor’s car – actually it had been Tracy Barlow – and went to prison again.

Plus, by then the twins were being adopted meaning Abi would no longer have any chance of getting them back. In fact, they later moved to Australia with their new family.

In prison, Abi struck up a friendship with Sally Metcalfe and the pair are firm pals still.

After a brief fling with businessman and property developer Ray Crosby, Abi realised he was a sleazy sex pest. She torched his car, and new boyfriend Kevin Webster gave her a false alibi.

But when Ray worked out what Kev had done, he tried to bribe Abi into sleeping with him, and blackmailed poor Mr Webster into signing over the

garage. What a rat!

But Abi played her part in exposing Ray’s crimes later on, when she managed to record him bribing a council official to help him secure permission for the development of Coronation Street.

In May this year, Abi was excitedly planning her wedding to Kevin. As she headed out on her hen night, son Seb and his new girlfriend Nina Lucas were walking home.

But they crossed paths with Corey Brent and his gang, who abused Nina for the way she dressed.

Read more: Roy Cropper to make a comeback this Christmas?

As Nina and Seb tried to run away, Corey and his mates pounced, giving them both a vicious beating.

Nina survived but Seb died from his injuries.

Since then Abi’s been struggling. Especially when Corey was found not guilty of the crime.

Determined to see him face justice, Abi got a gun from her ex – Seb’s dad – Tez – and planned to kill Corey.

But she was talked out of her vengeance by Roy Cropper, and Corey eventually got caught thanks to homeless newcomer Stu, Gary Windass and Abi herself.

What’s next for Abi?

Abi’s finally tied the knot with Kevin and they’re happily planning their future together with Kev’s son Jack.

But Abi’s keeping a secret.

Viewers know that on the night Corey was found not guilty, she slept with Imran Habeeb.

So far, Imran’s lied to his girlfriend Toyah Battersby and told her he slept with a stranger.

But this is soap, and secrets never stay buried for long. We’re certain Abi and Imran’s night together will be revealed soon. But how will the truth come out? And will it mean the end for the new Mr and Mrs Webster?