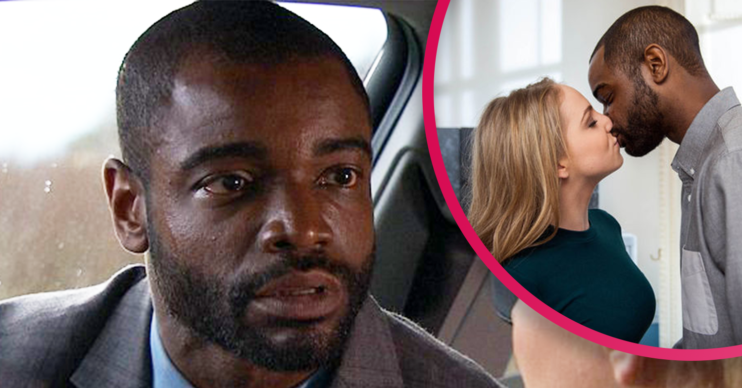 Who is Jermaine in Emmerdale? Jamie isn’t the first married man Belle has had an affair with

Belle has been talking about her former flame

Belle Dingle’s affair with Jamie Tate may stir up bad memories in Emmerdale.

That’s because this isn’t the first time she’s had a secret romance with a married man.

Remember Dr Jermaine Bailey who arrived in the village with his wife Angie back in 2015?

Here, we take a trip down memory lane and investigate who was Jermaine in Emmerdale and the reason he left…

Who was Jermaine in Emmerdale?

Jermaine, played by Michah Balfour from 2015 to 2016, was the village doctor at Abbott Lane Surgery.

He and his wis wife Angie, who was also a doctor, had been married for eight years before they arrived on the Dales.

They had been trying for a baby but she suffered at least one miscarriage, which put a strain on their relationship.

He later claimed this was partially to blame for his wondering eye.

Some months after arriving in the village, Jermaine treated Belle at his surgery after she accidentally cut her hand.

Immediately, sparks flew and he asked her out – despite being married.

Shortly after their date, Belle found out that Jermaine had a wife and was furious.

At the time, she had just learnt that her father Zack had been cheating on her mother Lisa – and she was desperate not to follow in his footsteps.

However, she soon gave into temptation and secretly continued the romance.

But Jermaine wasn’t the only person not being entirely honest.

Belle also failed to tell him that she was just 17-years-old.

Although he was disturbed at first, it wasn’t long before the pair’s romance was back on.

Drama on the Dales

The doctor was so distracted by Belle that it began affecting his work.

On one occasion, he accidentally told David that he didn’t have cancer when in fact he did.

It then wasn’t long before Belle and an unknowing Angie crossed paths.

The teenager grew increasingly resentful towards Jermaine after meeting his wife.

Desperate to no longer live a lie, she deliberately planted a lipstick in his car for Angie to find.

However, Jermaine came up with the perfect excuse when she did and his wife believed him.

Jermaine feels the wrath of Cain

Eventually, Cain Dingle found out about the affair and was livid to know a grown man was having an affair with his teenage sister.

He furiously confronted Jermaine at his surgery in front of his stunned wife.

Desperate not to be caught out, Jermaine claimed Belle was his stalker.

Cain and Angie both fell for his lies.

When Lachlan White found out, he felt desperately sorry for his friend and devised a revenge plot to take him down.

Later that night, he and Belle broke into Jermaine’s house and trashed the place.

Awkwardly, they were caught in the act by the doctor and his wife – who called the police.

Jermaine’s bizarre reaction didn’t escape the notice of Angie, who then grew increasingly suspicious of her husband.

Realising that something wasn’t right, Angie finally confronted Belle – who told her the truth.

Heartbroken, she kicked Jermaine out of their home and ended their marriage.

READ MORE: Emmerdale and Corrie will still feature sex and murders despite distancing

That same day, the doctor was beaten up and hospitalised by a furious Cain.

When he was eventually discharged, Jermaine was informed that he had lost his job and that the news had made the local paper.

Unsurprisingly, he then packed his bags and made plans to leave the UK.

Belle lies about her pregnancy

Devastated at the thought of Jermaine leaving, Belle lied and pretended she had fallen pregnant with his child.

Although the Dingles despised the doctor, they put their feelings aside for Belle and the baby.

He eventually returned to the village and even moved in with Belle.

But the pressure of lying to Jermaine and her entire family became too much for the teenager.

Rather rapidly, her mental health began deteriorating and she began hearing voices.

Jermaine then revealed to the Dingles his suspicions that the teen may have schizophrenia.

Angie overheard Belle talking to the voices in her head during an evening at the Woolpack.

Listening in, she heard the teenager admit that she had lied about her pregnancy and reveals all to Jermaine and the Dingles.

Distressed and overwhelmed, Belle then had a mental breakdown and was taken into hospital.

After receiving treatment and seeing an improvement, Jermaine announced that he had been offered a job in Boston.

Initially, Belle was excited and agreed to move to America with him.

However, after having some time to reflect, she decided to stay in Emmerdale with her family.

Jermaine in Emmerdale then left without her.

After his final episode aired, actor Michah tweeted: “I know jermaine wasn’t everybody’s cup of tea but I had a great time on #emmerdale!

Will history repeat itself with Jamie?