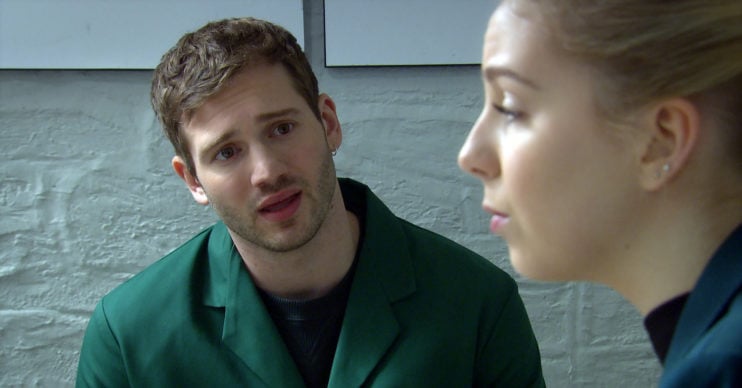 Emmerdale has become the first UK soap to return to filming and show bosses Jane Hudson, Laura Shaw and Kate Brooks have admitted the new way of working has presented some challenges.

Not least to a specific storyline that was “too far down the line” to be changed, but now leaves them with a problem as to how to film it.

With new social distancing measures in place, meaning no one can be less than two metres apart, Emmerdale has employed various techniques, including a two metre pole and distance marks on the floor.

Prepare to be amazed by Emmerdale

Speaking at a virtual press conference to ED! and other media, executive producer Jane, revealed viewers “will be amazed”.

“You’ll be amazed, you won’t really notice that they are two metres apart. There are some very clever camera tricks you can do.

“There’s a lot of choreography on set at the minute. It’s very clever.”

But with the heart of soaps being love, affairs, and fights, how will the show cope with these changes?

We have got a storyline coming up and we’re too far down the line to change it.

“We have lots of looks of intent which actors can pull off,” Jane said.

“There’ll be lots of looks of intent, lots of going upstairs, arriving back in scenes with shirts being tucked in.

“For the scenes where we’d normally have fights, there will be looks of menace, things being picked up in a menacing way as somebody walks towards somebody and they just happen to walk back as they’re getting closer.”

But she also added they are “holding back” on some stories.

“I think it’s fair to say some stories we might hold back on slightly because we really did want to do a big steamy affair or a big fight or something.

One Emmerdale storyline will be challenging

“We have got a storyline coming up which we shoot very, very soon and we’re too far down the line to change it really. We’re commited to it.

One way of getting round the social distancing issue being employed by New Zealand based soap Shortland Street is to use mannequins instead of extras.

But Jane ruled that out for Emmerdale and said she felt it was “quite insulting to supporting artists”.

The soap also isn’t concerned about getting output back up to their usual six episodes per week.

Emmerdale is currently airing three times a week, but from next week (Monday, June 8) the show will reduce further to just two episodes.

“Right now, for us, we’re just concentrating on making our show,” Jane said.

“There are lots of people bigger than us at Network Centre focusing on that area. We’re just focusing on getting back to work and that for us is a massive achievement.”

She also revealed she’s been chatting to the other soaps and sharing ideas for how to deal with the challenges.

“It’s nice for once that the soaps are doing it and we’re being recognised for what we’re doing,” Jane added.

Emmerdale begins airing its special lockdown episodes next week on Monday and Wednesday at 7pm.

Are you looking forward to Emmerdale’s return? Leave us a comment on our Facebook page @EntertainmentDailyFix and let us know what you think of this story.