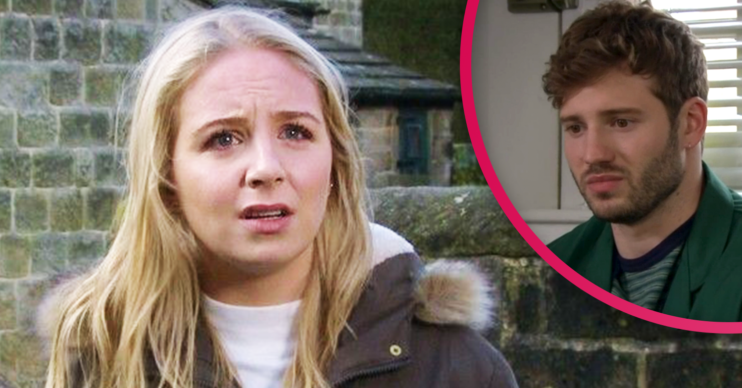 The Emmerldae favourite was diagnosed with schizophrenia

During an explosive row at the Woolpack, he ridiculed Belle Dingle’s mental health by branding her “crazy”.

His spiteful comment came just days after she opened up to him about her schizophrenia diagnosis.

And Emmerdale fans tuning in at home were furious.

Emmerdale fans side with Belle Dingle

Taking to Twitter, one wrote: “Who the hell does Jamie think he is calling Belle crazy after she recently opened up to him about her Mental Health issues really?

“She totally should of slapped him for that alone #Emmerdale.”

Another then posted: “Jamie would stoop that low by calling Belle “crazy” says a lot about him and his character #Emmerdale.”

Moments later, a third added: “Just watched Emmerdale and I officially hate Jamie and the way he insulted belle and her mental health issues.

“I can’t believe only Charity and Vanessa stood up for Belle. Jamie the married one not Belle.”

As Belle begins to talk more openly about her mental health, here’s a reminder of what she’s been through so far.

It was back in 2014 that Belle (Eden Taylor-Draper) first started showing symptoms of schizophrenia.

At the time, she had just been released from prison for the murder of her pal Gemma Andrews.

Clearly struggling and feeling overwhelmed, the then teenager started hearing the voice of her dead friend.

The hallucinations then began telling Belle what to do resulting in her behaviour becoming increasingly erratic.

She trashed the home of her elderly neighbour Edna Birch, bit Katie Sugden and also made furious phone calls to her school.

Desperate to get rid of the voices she was hearing, she started taking legal highs with her new friend Lachlan White.

In reality though, this made the situation worse.

When Katie died after plunging to her death at Wylie’s Farm, Belle became convinced it was her fault despite not being there.

Certain she was somehow to blame, Belle tried to take her own life in 2015.

Belle is taken to hospital

After trying to take her own life, Belle was finally admitted into hospital for treatment.

During her stay, her cousin Aaron Livesy visited and promised she wasn’t responsible for Katie’s death.

She slowly then appeared to be getting better.

However, a year later, her mental health deteriorated once again when she stopped taking her medication.

This was at the same time she was having an affair with the village’s new – and married – doctor Jermaine Bailey.

Without her medication, Belle’s symptoms returned and voices began telling her what to do.

This included pouring wine over her stepmother Joanie on her wedding day.

More alarmingly though, the voices also instructed Belle to fake a pregnancy.

Jermaine’s long-suffering wife Angie discovered what was happening after overhearing Belle talking to these voices.

When she revealed to the Dingles what their daughter had been doing, Belle was distraught and had a mental breakdown.

Not thinking clearly, Belle then ran away from home and ended up living on the streets.

Thankfully, she was found by a police officer who brought her back but the experience had worsened her symptoms.

In fact, after returning home, the voices in her head told Belle that her mother was evil.

When Lisa tried to hug her daughter, she reacted very badly, prompting the family to take her to a doctor.

This time, she was finally diagnosed with schizophrenia.

Following her diagnosis, the next two years weren’t exactly much easier for Belle.

Her disastrous relationship Lachlan White had a big impact on her mental health.

She struggled even more desperately when her mother Lisa decided to leave town following the breakdown of her marriage.

In May 2018, Belle took it upon herself to check into a mental health unit for help.

Although her stay did improve her mental health, the following year, Jamie Tate arrived on the scene.